hot night for baseball and bbq 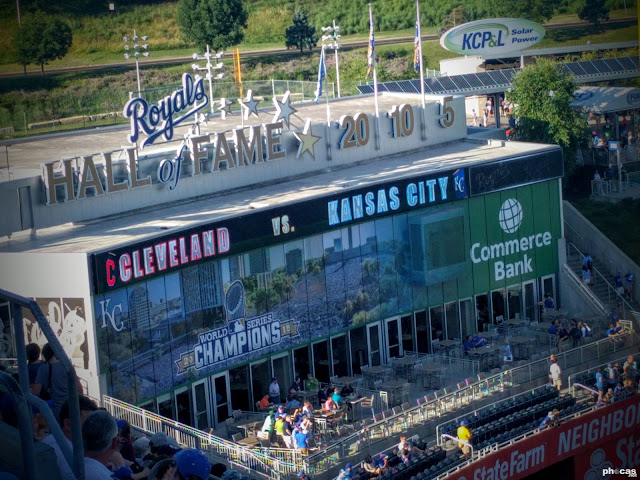 Making or way out to Kauffman Stadium early in the balmy Kansas City afternoon for a little BBQ and Baseball, thermometers everywhere clearly stated that it was only 36 C. We understood otherwise. It had to be at least 40 C. This seemed especially true out in the parking lot of the stadium, where tailgating was already in full swing when we arrived.

Indeed, we appreciated Ed Jones hooking us up with tailgating foodstuffs from Jack Stack, and tickets to the game. It was a good spread, but we ate entirely too much to be able to contribute anything further to the Kauffman vendors; excepting a couple of cocktails, that is. 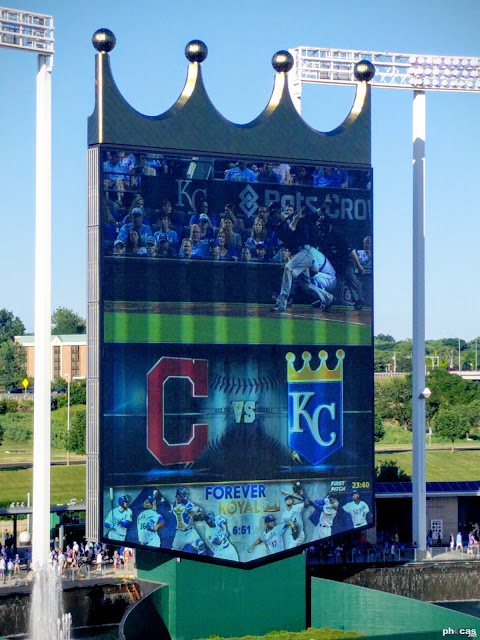 It was going to be a really a hot evening for baseball, in more ways than one.  The Kansas City Royals were battling the Cleveland Indians in the final game of the brief series between the two this week.  An important game for the Royals, if they won it would put them back in first place in the American League Central, alongside the Indians.

Waiting for the game to start, the temperature on the scoreboard continued to taunt us, refusing to budge any higher than 36 C at game time.  It was not quite as bad as it could have been though.  We had faint breeze up in 405, and a fantastic view of the field. 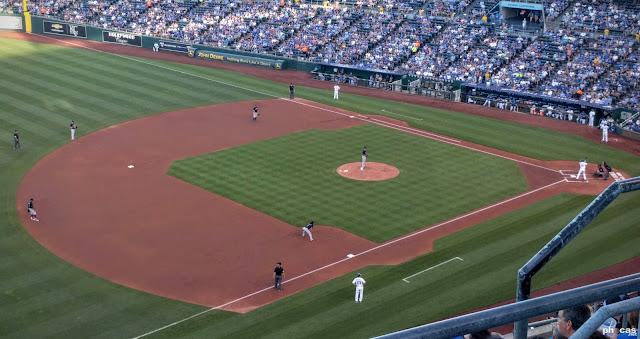 The Royals got off to a good start with two runs in the first inning, mostly due to sloppy play by the Indians.  The scoring went unanswered until the fifth inning, when Cleveland matched those two scores on equally sloppy play by Kansas City.  We understood.  It was hot.  Nobody is perfect in that kind of sweltering heat.

There was not much cause for concern though.  The Royals quickly scored again in the bottom of the same inning, giving them a 3-2 lead.  Salvadore Perez secured that lead shortly after that, stepping to the plate and hammering a 3-run homer into centerfield pushing their lead over the Indians 6-2.

The Indians were unable to answer in the top of the sixth, and Salvadore again helped the Royals widen the gap further at the bottom of that inning.  Perez was having a stellar night!  Indeed, the entire team seemed to be hitting the ball into just the right spot all night long, keeping the Indians stretching themselves out all over the field.

Cleveland could only answer with two more runs in the top of the seventh, with no further scoring for the remainder of the game, with a final score of Kansas City Royals 9 – Cleveland Indians 4. 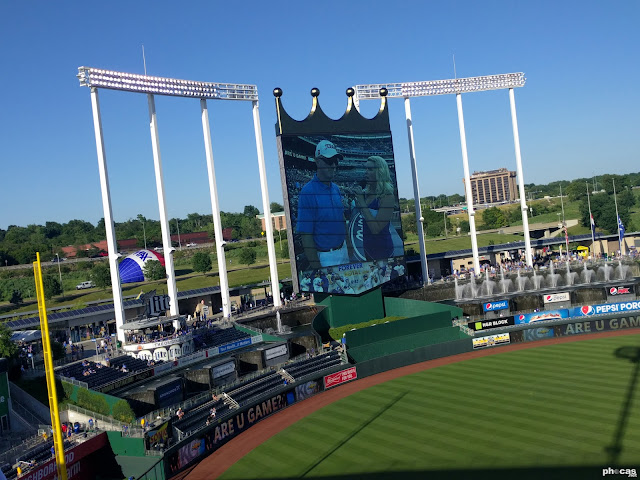 In spite of the heat, it was good night for baseball out at Kauffman stadium.  We were likely luckier than most, with a very slight breeze along the outer wing of the upper deck.  I cannot imagine how it must have been in lower sections, where the breeze is too often non-existent.

I continued my experiments with the camera on the Nexus 5x, but our location in the stadium did not facilitate very many good photos.  I was lucky enough to capture that 3-run homer by Salvadore Perez though on video.  I had been trying all night to get one good video clip.  It seemed that every time I tried, all I could get was a foul ball or an out.  I kept trying though, and finally got lucky!
KC sport
Location: Kauffman Stadium, Section 405, 1 Royal Way, Kansas City, MO 64129, USA