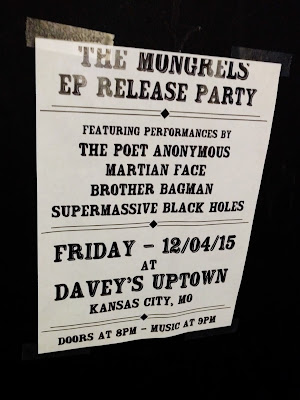 The Anonymous Poet, Martian Face, Brother Bagman, and Supermassive Black Holes joined up with The Mongrels to celebrate the release of a debut EP by the latter.  Davey’s Uptown Ramblers Club has always been the go-to spot for good local Rock-n-Roll talent, and a few YouTube from Brother Bagman sold us on the notion though. We were open to most anything anyway, but you never know what you might get, and sometimes, a few things are just not on the list.

Indeed, the primary goal for the evening was some good music that we did not have to stay up all night for.  We were ditching another show because of that second point.  For some reason, a lot of event coordinators in KC believe that a good night of music cannot start before 10 pm; as well, any headliner should not play before Midnight.  That makes for a long night, especially on a Friday. Whatever happened to being able to go out for a little dinner and dancing?  In Kansas City that only seems possible if you are prepared to eat at 10 pm, and are willing to stay up all night.  It would be great to see a venue hosting some early evening House music.

Davey's is dedicated to Rock & Roll though, and always serves it up early through the late hours. This event was slated to start up at 830 pm, with a few short sets by the locals, and longer sets from the headliners and those for whom the EP release party was being held.  As things always seem to go in show biz, the sets started late.  They were only an hour behind, and it was no big deal.  We were a half-hour behind anyway, and arrived just in time for the final sound check.

A duo called The Anonymous Poet kicked things off with a solid performance of some of their work.  With one on acoustic guitar and another on a Cajon, we enjoyed listening to them trade off a couple of times, while providing some interesting Spoken Word sort of lyricism.  At the end of their set, several others joined on stage.  We really were not sure who they were, but got the impression it might have been The Mongrels.

Martian Face was next on the line-up, and included one of the duo from The Anonymous Poet on percussion.  The six member troupe, led by a bearded mountain on acoustic guitar, hammered through about 5 really good tunes that left us wishing they could play a bit longer.  While similar in style to the previous band, the additional members ramped up the energy and got a few folks on their feet and dancing.

Sometime around 11 pm when Brother Bagman took the stage.  The four-piece group changed the pace and style slightly.  There was no Spoken Word now, only a Jam Band somewhat crossed between the Dead and a little Southern Fried Rock.  The first half of the set was good, and we were a little disappointed to have to leave, but the length of the day was starting to wear on us a bit.  Someone mentioned that the band comes to Kansas City every so often, so we will have to keep an eye for the next show.

There were no photos from the night; only the YouTube below.  Obsession with testing out video on the new phone took precedence, as did the Warp filter in post-processing.  I think I need to put my thumb over that mic though.  Enjoy!