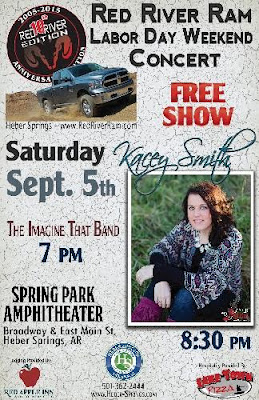 While on a fishing expedition in Arkansas, a friend and I wandered across this random event.  Actually, to be perfectly honest, it was somewhat planned.  We had been at Mack's Fish House the night before, and a few of the members of the band were putting on a little show.  The guitarist was on point, and the vocalist had a very fine voice indeed.  There were a couple of other vocalists that sat in too, and they were good, almost the same quality.   After one of their sets, they indicated that they were playing down at the park amphitheater the next night.  We knew of it and planned to drop by anyway, but this little show convinced us to stop in for a moment.

That was about as long as we stayed though.  We had been out kayaking and fishing all day and exhaustion got the better of us.  We dropped in for about three or four tunes, which were mostly covers of 80s pop rock tunes.  It likely turned into a good crowd.  Another girl out of Nashville was going on at 830 pm, and folks were continuing to show up as we were leaving.

The Spring Park Amphitheater is a nice little spot too.  Right in the middle of town, it seats a few hundred, and the surrounding hillside terraced three or four times over.  Folks can sit little bit of everywhere.  You could probably squeeze a couple of thousand around the area easily. Inside the amphitheater seemed louder, with the rock wall at the back reflecting a lot of the sound.  It is very likely that the more folks packed inside, the better the sound.


... only took a few photos that night and then there is the video found from YouTube ... 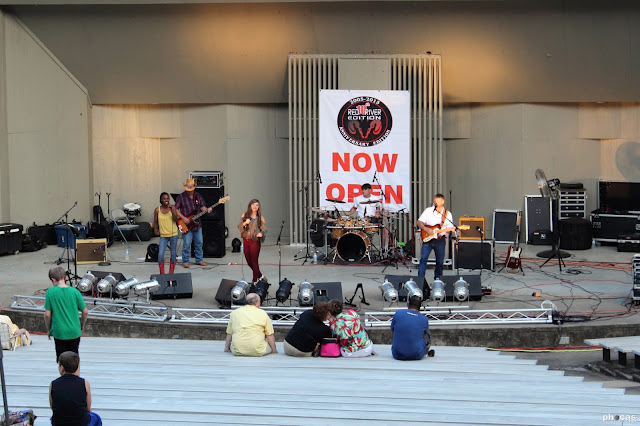