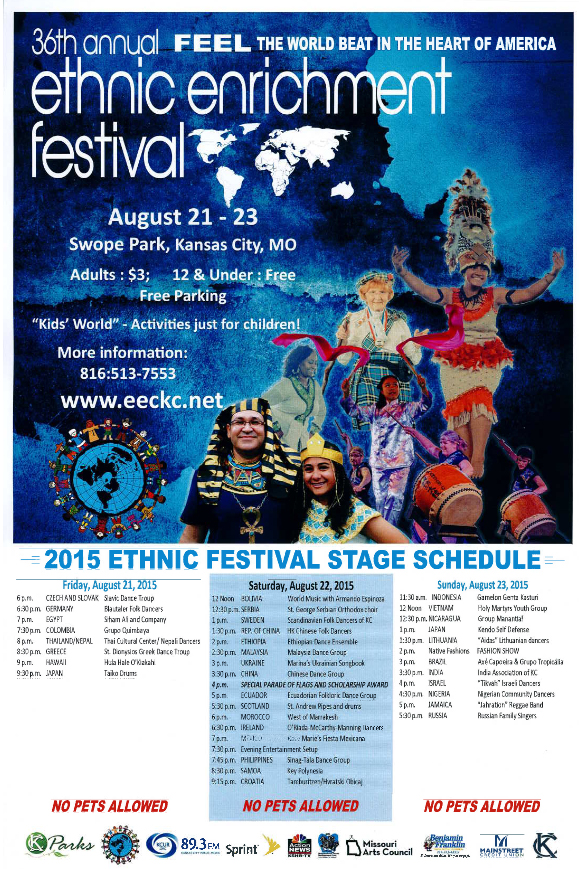 After spending the afternoon watching the Blue Angels perform for the Kansas City Aviation Expo, we headed out to Swope Park to taste the cuisine offered at the 36th annual Ethnic Enrichment Festival.   We had not been since the 25th and were quite anxious to see how much the annual affair had grown, and what new things there were to see.

The situation had expanded quite significantly since our last visit, which became very apparent as we approached the gates on 63rd Street.  Traffic was backed up for about a half mile, but we progressed quickly.  It was still at the pavilion near Starlight Theater, and we easily maneuvered our way to a parking spot on the lawn surrounding the festivities. 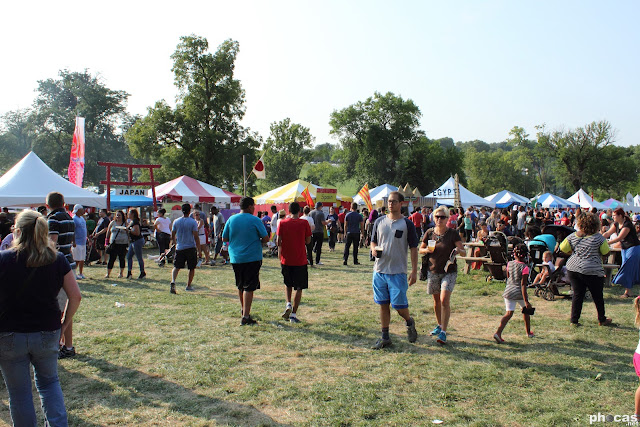 The festival was no longer free, but who could complain about that.  It was somewhat expected after all that time.  Three dollars is not too bad for a day of music and dance performances from just about nearly every ethnic group in the world.  Additionally, food tents surrounded the pavilion offering a variety of treats for every pallet, at a reasonable price.  The food tents only covered a small portion of the area on our last visit, but now encircled the pavilion, and then some.  It was a welcome sight, but a little disappointing at the same time.

We might have missed it, since we were only there for a couple of hours, but there seemed to be a general lack of display of ethnic custom that had been readily apparent on my last visit.  Open-air discussions about culture, customs, and identity could be found anywhere.  It was lacking on this round, replaced by trinket tents.  It would be good to see a return to more of that. 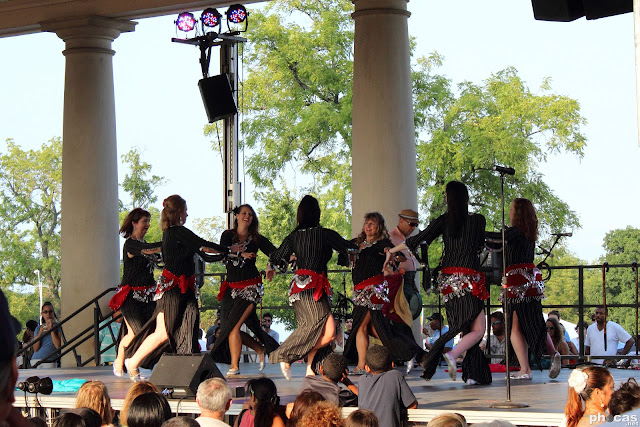 A world of flavors were available for the sampling though.  We started with a sampling of German food, and then over to the beer tent to wash it down.  After that, we grabbed a sweet treat from the Norwegian tent, as well as sampling a little Kenyan goat and rice mixture.  Every tent had patrons, but some were simply impossible, due to the length of the line.  It is funny how folks can get Asian food anywhere in our City and will still wish for nothing more than a little fried rice.   Had they been serving true Asian cuisine, I doubt there would have been quite as many visitors.

The performances were not very accessible, and the logistics of the situation tends to force people away, rather than bring them together. Situated on top of a small rise, the pavilion is a fantastic spot for dance and music performances, when the crowd is small, as had been the case years ago.  So many people attempt to crowd into the covered space, that it is impossible to stand away from the masses and enjoy the performances.  Twenty yards or so away, and one could barely hear the music.  Viewing the performance was out of the question, more often than not.  The organizers really should consider a small valley that is only a hundred yards away next year.   It would be much better suited to this scenario, and act as more of a theater. It would most certainly demand more attention of the patrons, enabling everyone to enjoy all of the performances. 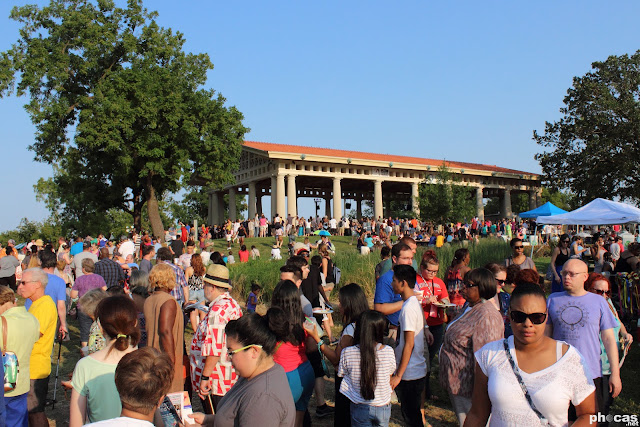 We did enjoy our brief time at this truly unique Kansas City experience though.  A friend of a friend from Boston that went along with indicated he wished that they did something like this in his town.  Apparently, they have a variety of ethnic festivals, but none that try to bring everyone together like this.  That is the whole point too, to bring all ethnic groups together, share a little food, fun, and celebrate the things we hold in common.