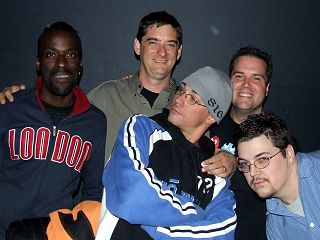 Well, I wasn't particularly fond of the new layout, so I ditched it for now. I am beginning development on a new backbone, but I really hope to be able to keep much of the same structure. With any luck at all, the whole change will be mostly transparent.

Anyhow... the cover this month is from back in '01 at a little night called Echobass Mondays, held at the former Club Evos in the west bottoms of Kansas City. This event, along with others such as Stylus Fridays & The Wednesday Perk would ultimately help pave the way for electronic music in Kansas City to emerge out of the underground. Each of these nights in had their own significant contribution to the shape of things to come and the people that I met in these humble beginnings will always be remembered. Without them, none of this would have happened. My thanks to them. Specifically, to DJ Fitzroger, who allowed my camera to snap that first shot.

The shot to the right is of the whole krewe from last month's Blackliquid show at the Grand Emporium. It was definitely a good time and people couldn't seem to stop dancing, much like the last time he was here for our anniversary party this time last year.

This month, for our 5th Annivesray Party, we've gotten involved in two events. The first on Saturday, December 9th is dedicated to the club crowd and house heads and will feature DJ Mazi from Chicago at the Grand Emporium. Opening for Mazi will be local Saturday resident DJs Steve Thorell & Eric Sheridan.

The second will be Christmas Massacre - The Return on Friday, December 22nd. As one of the first "raves" that I photographed back in 2001 and with them celebrating their 5th birthday too with DJ Shiva, Arsenic, Offtrack and some of the best Techno & DnB DJs in Kansas City... this is surely going to be an awesome month for dance!
zine.v1.stories
Location: Kansas City, MO, USA