Brent Crampton ~ Interview with Sonia Hassan & Ron Trenty ~ Club culture beyond the cocktail: Africa Hi-Fi "This music is a higher form of communication; when it is channeled and used properly, when the sound is correct and the energies (of the people) in the room are vibrating together . . . that's when it all happens." 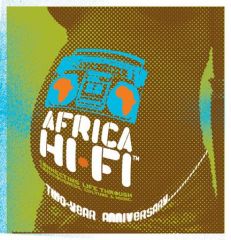 This is music according to Ron Trent, co-creator and resident DJ at Africa Hi-Fi.

"Yes," replied Sonia Hassan, the 'harmonious' host and fellow co-creator of the night. "Emitting that energy, the DJ has it, and they're spreading it - that's the vibration bringing all into one."
Relating the DJ and dancers as the priest and congregation, while sitting in a high-rise apartment in downtown Chicago, Trent went on to say, "That's why the DJ as god thing is garbage, because we (the DJ) are connected to that dancefloor."

Hassan and Trent: two people with a clear purpose, coming together to make a difference. Rather than providing a club-clichÈ space to drink and socialize, these two promoters are deliberately changing a dancefloor into a sacred, rhythmic sanctuary. For them, that difference takes place once a month at Sonotheque in Chicago during a monthly event titled Africa Hi-Fi.

The motherland; the hot bed of creation and creativity - Africa is the soil with which the roots of music are bound. To honor this, pay homage and "present an open forum that will tap into the creative energy of Africa to help elevate the consciousness of people," said Hassan, Africa Hi-Fi ultimately "fuses music and social consciousness with art and dance."

As the sound protruded from the pristine Function One system during their August 11 two-year anniversary event, what I heard Trent mix was a story-line of musical messages. Fela Kuti, founder of afro-beat, vinyl-atticly fueled the airwaves with his politically challenging message. Then matching the drum rhythms of the non-quantized track, Trent blended in an atmospheric, celestially induced house track with a breathy afro-Cuban flair. Half an hour later - James Brown, after that - A Tribe Called Quest, after that, a future soul, funk, jazz musical onslaught.

The people, some 200 of them during the peak, are moving. Some heads bowed, swaying to the sound, feeling their memories of when they first heard Trent's Manu Dibango selection, or creating new memories when they hear an Osunlade track for the first time. Some were ecstatically absorbing the pulsating groove and shaking their bodies as if awakening something ancient. Some leaning against the bar, saying to me, they wish this night happened more than just once a month.

Each generation of music came from its predecessors. While the tracks Trent plays comes shrink-wrapped in different music categories, span many decades and continents, the drumbeat is the cohesion and the ancestral lineage leading back to Africa is the message.

Record label owner, international DJ and producer, Trent was there to lay the foundation for what we know as the Chicago house music scene. But to say Trent is a 'house DJ' is too limiting, as he boldly says. "To be honest with you, house music is dead. When they formulate it and put it in a box, it's a done deal. But the roots and elements live on forever."

And it's those roots and elements that Trent has continued to pull upon with his music selections at their night. 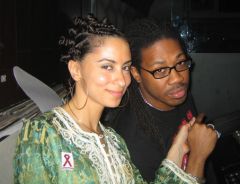 "Each song has a program like a computer chip," explained Trent. "My thing is to put together a program that will evoke a lot of different emotions. I want to take you on a journey of past memory, of future memory; the places you are going that your body already knows."

And while Trent and Hassan's story may sound foreign to the culture and structure we attribute to dance music, all it takes is a look into past memory to see that they're carrying the torch set a blaze before them.
Indeed, since the beginning, music has been a tool of communication to gods and spirits, and a sacred expression of the human condition. For as Alvin Ailey, American Dance Theater Director, said in a National Geographic article, dance is "as close to God as you are going to get without words."

But even more recent, when you look back to the root of club culture, you find an interesting upbringing...
David Mancuso is accredited with laying the foundations for modern club culture with his legendary Loft parties in NYC during the '70s. Pioneers for dance music such as Larry Levan (Paradise Garage) and Frankie Knuckles (Warehouse) regularly attended and were inspired by these parties. But what started it all was a very organic progression.

Mancuso often conversed and attended gatherings by pop-icon, Timothy Leary. Through their association, Mancuso was inspired to host small gatherings of people where LSD would be consumed, and various activities, such as transcendental mediation, would take place, according to Trent. To accompany the psychedelic process, Mancuso constructed music tapes to play throughout the trip. Dancing naturally began to take place more frequently until he decided to throw a large event solely geared towards LSD consumption and dancing, which eventually led to the historical plaque known as the Loft parties.

Mancuso speaks of the "third ear" when he was selecting the music in Tim Lawrence’s Love Saves The Day. "There was neither the DJ nor the dancer. Someone would approach me to play a record and I would already have it in my hand... It got very psychic because we knew we were following a sonic trail."

And as that trail led on, it paved a template and served as an aspiration for thousands. From humble beginnings in an NYC loft space while indulging in LSD-induced meditation and musical experiences to what music has become today, there are still many using music and dance as a sacred and spiritual path.
I'm talking about Deep: Where House Lives in LA with Marques Wyatt; former night, Body and Soul in NYC with Danny Krivit, Joe Claussell and Francois K., Soul Revival in Boston with Adam Gibbons and KC Hallett. There are club nights, DJs, promoters - people from all over the world who are elevating club music a bit beyond the cocktail. Rather than just a four-to-the-floor beat going on in the background while jager bombs are being shot, people are using this music as a tool for social progression, for spiritual outlet, for fellowship - for many things.

With infinite stories to tell, I've chosen one to tell now, and it goes by the name of Africa Hi-Fi...
"This music is unity music," said Trent. "Where it was played, how it came about."
"The number one goal is to unite no matter what the fuck you are," said Hassan.
The night is based on vibrational energy. "Why do people dance?" Hassan asked rhetorically. "Certain frequencies can change your vibrations, and most of our music is based on a positive frequency." 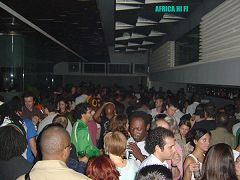 With 'master resident dee-jay selector' Ron Trent, the positive frequencies of the night have featured past guests including Francois K., Rich Medina, Derrick May, Jody Watley and various dance acts ranging from Capoeira, tribal belly and carnivale dancers. They've featured visual artists to take command of the flat screens, or conduct live paintings. Beyond entertainment, they support and spread literature on Amnesty International and NextAid.org - both non-profits that serve needs in Africa. In addition, Hassan has made a point of making the Africa Hi-Fi flyers and posters pieces of art in themselves. Their Africa Hi-Fi boombox branding has been widely recognized around Chicago and artfully respected, created by Cody Hudson. After Hudson went on to other major projects, Rob Hamilton took over designing the art and posters, and recently, Adam Gibbons. As Hassan likes to say, she's "incorporating entertainment with consciousness."

To check out more info on this night, go to MySpace, or their forthcoming website at AfricaHi-Fi.com.

"We are energetically connected, but people don't realize that, so they end up not caring about what else is going on in the world," said Hassan. "Africa Hi-Fi is a hypnotic way of bringing people together through music, letting them realize we are all connected, and healing them in the process."