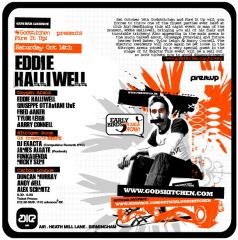 Mike Zelazek ~ A stroll down the Queensway from the gleaming Bullring and fire-bombed Dubliner bar will lead you to one of Birmingham, England’s, greasier superclubs—Air.

On a typical Saturday day eve, the queue starts growing beneath the Industrial Revolution era arches and squishy, chip-littered sidewalks much later than an anticipated Eddie Halliwell night. In preparation for the new national hero of hard house and hard dance, club-goers in Birmingham must squeeze by Air’s edgy security staff into an Amazonian atmosphere with steam machines creating rain clouds on the lower level.

By the 1:30 a.m. headliner set, everyone in the club is moist to some degree. While the comparative lateness makes Plump DJs after party less attractive to a foreigner, the group attitude and energy is evocative of advice avidly taken from the Human Traffic “screaming kettle” pep talk.

Upon the national brand of the weekend warrior ethos, Halliwell has increased the brightness of his own spotlight especially over the last three years. His sizable following of nutters live for his exhausting performances. “Jenny,” one such groupie (and self-proclaimed lesbian love child of Paris Hilton and Kate Moss) traveled with her mates from Liverpool on this weekend to Birmingham (Brum) to round out their summer trek across the UK to see the man noting Global Gathering and Creamfields as other highlights. While the faux-hawked, furry-booted crowd feigned Tylor Leigh’s vinyl-less set as amusing with classics from the last few months, they expressed their want for the pixie DJ to vacate the stage and allow Eddie take to charge and put the club into full-on Bosh mode.

When the main man did take the stage, his reliable smile quickly turned fierce as the plug was mistakenly pulled on one of his signature intros. His momentary Milli Vanilli-ish paralysis caused his entourage to scramble and adoring fans to sweat, but once repowered, the beginning of the night’s pounding began and let up only for only a few trancy highs amidst some revved up Prydz and cross-Channel beats from Marcel Woods.

In all its slick, split-level glory, Air can deliver on a tidy weeknight-er out in Birmingham. But how does the place compare to Broad Street clubs? Space is at a premium in any of the Digbeth neighborhood clubs including Air, and depending on your comfort in being groped by strangers several hundred occasions per night, it may not be the ideal scene. Godskitchen usually has a strangle-hold on the best performers, so it leaves little choice for the time being. And dependent on your preference, the £25.00+ cover for next month’s O’Bir and Tiësto gig, might lead you choose to a venue with more freedom, and yes, air.