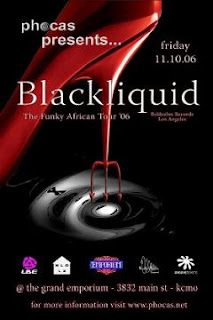 (Originally published in the "on decks" column of the December 2005 issue of phocas.net. Scroll down, read and listen.)


Hailing from London, Iheanyi (Ike) Ngwaba aka Blackliquid, came to Los Angeles armed with 16 years DJ experience and 12 years of production. His intention was to spend as much time with the best of the best talent in the United States writing, producing and DJing. After a quick six years, he accomplished that goal and established a solid reputation as a one of LA's best House DJs, Entertainers & Producers, playing right alongside of the biggest names in the industry.

Only recently, he finished a remix for DJ Colette's "Hypnotized" and I had the rare opportunity to preview that track. It is definitely hot! It just so happens that this particular track has also been released on the new compilation CD, "Femme Fatales". In addition,he has new EP, entitled "The BlackLiquid EP" that is very near release on Magnify Music, though no date has been given.

Originally mixed for last December's "on decks" column, we thought it would be good to pull it out of the vault again so you can have a little taste of what's in store for Friday, November 10, 2006 at the Grand Emporium when phocas presents... Blackliquid at 10 pm.


All tracks are written, produced and remixed by Blackliquid. Hope you enjoy! For more information, visit BlackLiquid.com