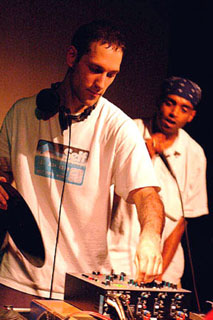 Hailing from Victoria, BC, by way of Toronto, ON, Canada, Jeff Harris aka Plastic Motive has been active in the electronic music scene for well over a decade. At the age of 27, Jeff has run 3 different production companies (Sourkee, NeXstep and Blunted By Choice), as well as two very successful weekly nights (Re-Form and Funk’N Fridaze), and has played a major role in the Canadian underground electronic music scene.

Jeff began spinning under the alias Plastic Motive in 1998 and landed his first gig in little under a year. Before that he would mix cd’s and tapes at school dances and friends birthday parties. Like most DJ’s, Jeff took to music at a very young age and it was no surprise that he would aspire to share his passion with the world.
From 1999 to 2005 Plastic Motive held down DJ residency spots with 6 additional production companies (ONdaFLY, Goodfellaz, Funkadelic, Impure, Embryon and 420 Pro) all in the Southern Ontario area. He describes his style as “Nu Skool Electronic Rock n’ Roll” as he strives to stay ahead of the game with his sound. Drawing his influences from many different genres, including Ska, Punk, Industrial and Hip hop, he says “I think I have a fairly well rounded taste in music and it helps to make me a well rounded DJ..” It’s for this reason he is now entertaining international inquiries from all over the world.

Plastic Motive is fresh off of his recent stop in Shanghai, China, and has played in other such cities as Montreal, New York, Buffalo, Seattle, Vancouver, Victoria and Niagara Falls, among many others. Recently, Plastic Motive has been trying his hand at production, having helped on a couple remix collaborations. He says more production is definitely in his future, but for now, his main focus is to continue to throw “kick ass events” while keeping his live performance level as high as it can be. “There’ll always be more nights, more parties” he says, “I’ll just keep playing this stuff till everyone likes it! They won’t even have a choice!!”

Be sure to keep your eyes and ears open for Plastic Motive on the decks near you soon. He plays hard. He plays funky. He’ll make you freak on the dance floor like you’ve never freaked before!! Breaks, beats, and heavy Bass are at the top of the menu when this man comes to town, and he’ll serve it to you Red Hot! Get ready to get it on!!!

Have a listen to Plastic Motive's Mix, "Cheese & Crackers" to get a taste of what you can expect to hear from him when he opens for Frankie Bones at the Grand Emporium on October 13, 2006!   For more information on Plastic Motive, hit him up on MySpace!