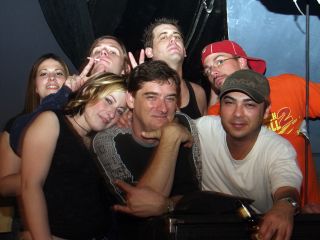 As evidenced in this photo, I am quite certain that they are onto my intentions with this "photo with DJ", that I ultimately use for this column every month. Everyone jumped in on this one, and I am quite happy they did. It will always be a reminder of a good night spent with good friends in celebration of my birthday. Though John arrived late after a delay caused by United Airlines, he still played one of the best 45 minute sets that I have heard in a long time.


The cover this month and the story that go with it are dedicated to a man who's reputation precedes him. The shot is actually one that I took about four years ago at a party down in the east bottoms called "Midnight Drive". Anyone that was there that night knows that Frankie can definitely lay it down and we definitely look forward to hosting him this coming Friday the 13th.

In a couple of the other stories this month, we get glimpse of a very long night for our writer Nathan, down in Texas with Tiesto and Kenneth Thomas. It sounds as if he had very good time and I found myself just a bit jealous that I did not make the trip myself.

That kicked off this past month in photos, as well as a small benefit I was a part of in Kansas City, called "Enlightenment". This was a two part fundraiser for a documentary being done on the politically torn African country of Sudan. You can find out more about the documentary by visiting the MySpacepage that was set up for it, or for a more in-depth study of the struggle there, visit the BBC.

Speaking of struggles, it seems that Skybox will never be open again. The entire month of September has definitely been a trial for the re-opening of the club formerly known as Kabal Restaurant & Nightclub. Week after week, hopes of re-opening have been dashed against the rocks and has caused more than enough grief for those employed there who rely on a regular paycheck. As well, local promoter Bill Pile (u:Move), with bookings stretching out through February of next year, has been forced to move some of the more popular acts to competing clubs, such as Kaskade at Grand Emporium and DJ P at Club NV. Things do appear to be looking up though and I suspect that they will very likely reopen sometime in October.

We did have a lot of fun with Kaskade at the Grand Emporium though and followed up the following weekend with a fabulous night of Drum & Bass at "Future Funkadelic". In between, I made a special trip out to Lawrence for an interesting night at the Jazzhaus with my good friend AC opening for a really great up and coming band, Order of Kaos. Their Psychadelic Funk seemed to be just what my soul needed.

Other notable events in September, featured "Rewind & Listen Again" in Omaha, a night dedicated to retro-80's and on the same night St Louis, they flashed back to retr0-70s themed even, "A Night at Studio 54" featuring Roy Davis Jr. Meanwhile, deep in the heart of Texas, Danny Howells played a late set to for an eagerly awaiting crowd.

Finally, though at the time of this writing Shaun has not yet uploaded the photos, we topped off the month with a reappearance in Kansas City by Trance idol, Paul Oakenfold. Though I was not overly ecstatic about hearing him yet again in Kansas City, I made the trip anyhow. I can honestly say that I was pleasantly surprised that he played with much more enthusiasm than he did in his last appearance here and technically, played as though he actually cared this time. In direct reflection and response, the crowd at Club NV pumped their fists and danced like there was no tomorrow.

October will be full of equally interesting adventures, leading up to the party-night frenzy of Halloween weekend. There's already a bunch of things to choose from in the Kansas City metro area and all points beyond. Keep your eye on the calendar, because we add new stuff all the time. Otherwise, I will see you at the midway holiday, Friday the 13th for the return of the legendary Frankie Bones!
zine.v1.stories