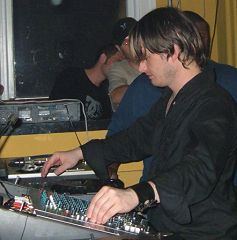 Nathan McWaters ~ Austin, TX - 01Sep06 - Of course there would be an afterparty. In fact, there was an “Official Tiesto Afterparty” being advertised two weeks before the event itself. Anyone who is even remotely familiar with EDM’s breed of afterparty for major players in the industry should be able to smell right through that line: there was no way Tiesto was going to come off of a two-hour set in front of who-knew-how-many thousands of slavering Austinites to travel to another venue, just waiting to be jumped by those selfsame slavering throng. It simply would not do, so the promoters did the usual thing and threw up a false front for the location of the afterparty, and bait the trap with another headliner to give the screen a 3-dimensional aspect. It may have worked on some, but not everybody, and certainly not I. Fact was, I didn’t care if Tiesto showed up or not; it was the talent lineup they were already promising that caught my attention.

Dave Molina and Bruce Gibbons drove in from San Antonio to open for Kenneth Thomas, who had opened for Tiesto just an hour beforehand. I had expressed a doubt to Kenneth after his set at Tiesto was done as to whether or not he had enough juice left in his batteries to open for Tijs and then turn around and drop another two-hour set that would be just as good. He challenged me to see for myself, and I had every intention of doing so.

Alley 416 is what you get when Sky Lounge closes off its main floor for renovation and renames itself Spin, but is still interested in making money from the Austin EDM scene. There had been a vicious rumor that in spite of selling out the venue with the likes of Ferry Corsten and Hernan Cattaneo, EDM wasn’t bringing enough into Sky’s coffers to keep it alive, and the owner had decided to turn it into an ‘80s retro club to cater to richer, older locals.

As is turned out, this wasn’t the case, though the renaming did come with a renovation of the main level; there was nothing wrong with the second floor, though, and while the main doors were locked and sealed, the back door into the alley behind 416 Congress Ave. was wide open at $10 for cover. Having gotten into Tiesto for free and been well-pleased, I gladly paid it to get a second dose of Kenneth Thomas. Alley 416 was well-prepared for the post-Tiesto rush, as there were cases of water sitting in the hallway that people could just grab; when those ran out, the bar charged for them. 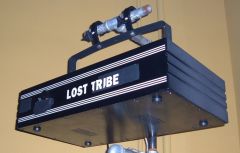 In spite of the leak that Tiesto was actually going to be at Karma after his set and not at Alley 416, there were about 400 or so that went to Alley 416 anyway. After the herd was culled with the confirmation that Tiesto would not be making an appearance after all, 300 still stood fast. Dave Molina and Bruce Gibbons were tag-teaming on the decks, with the floor being blazed by green lasers courtesy of Lost Tribe; they were scheduled for a two-hour block themselves, and they brought folks to their already-Tiesto-tortured feet with a pretty strong prog/trance set. Think Booka Shade and Junkie XL and that’s about the feel of it.

I hadn’t seen Molina since Hernan Cattaneo’s gig, so I spent a good chunk of time catching up with him and filling him in on how Tiesto did. Bruce Gibbons, whom I possess several mixes from, but never had caught him spinning live and it was pretty easy to see why he was integrated into Unit Circle down in San Antonio; he could play off of Dave Molina forever, and his skills are formidable in their own right.

I was again confronted with the age-old enemy of photography: smoke machines. I realize it was necessary to fill the world with particulate matter to enhance the effect of the lasers, but it was very out of control this time. When there’s enough smoke to cut off all visual information outside of ten feet, then there is entirely too much smoke. Alley 416 was a haze for most of the afterparty.

Kenneth Thomas appeared early, and decided to start off early, too. He seemed a little taken aback by the amount of people present, and what Dave and Bruce were dropping to keep them on their feet. Armed with this knowledge, he proceeded to follow accordingly, putting up a pretty raw house/trance blend that was really more trance-y than even what Dave and Bruce had thrown in, but it worked. As the hours progressed, the crowd had begun thinning out due to pure exhaustion and the bar closing at 0200, but the hardcore 100 or so remained through Kenneth’s whole set, showing great appreciation by mass-occupying as much floor space as humanly possible. I couldn’t trackspot a darn thing from his contribution to the afterparty, though I suspect the remix he dropped of Oceanlab’s “Satellite” may have been a Kenneth Thomas original; I have about five different versions of that single, and none of them match the one he played as his finale. I still haven’t found it, and that vexes me. 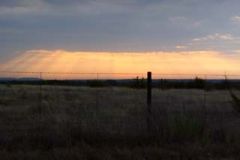 At around 0430, Alley 416 began shutdown operations, and the 100 dwindled down to about 45 or thereabouts. I caught up with Kenneth after his set, and he mentioned that he had been expecting a different sort of tone altogether from his openers. He had come prepared to drop a more minimal/electro set from what he did at Tiesto, but when he heard Junkie XL being played, he changed his whole scheme back to trance based off of that alone. I figured I had seen/done enough for the night after that point, and was totally thrashed already, so I bounced out of there and back to Fort Hood, fingertips still buzzing from the back-to-back stellar events of the evening. It was all worth it; I had found my sunrise.