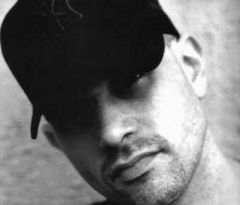 Sometime in the mid-to-late 80s, I heard his name whispered, at times in unison with his soon to be popular Brooklyn brothers, The Beastie Boys. Word on the street was that his music held that same explosive energy and he could juggle tracks on a pair of records as if he were born for that sole purpose. Unknown then was just how far his influence would spread and how many people's lives he would touch and change forever.
It began with Fourth Floor, Nugroove Records and the "Bonesbreaks Vinyls" that captured the imagination of the rapidly evolving European rave scene. Playing to 25,000 London ravers in 1989, he quickly exploded across most of Europe, reigniting a passion about dance music by adding his own unique fuel to the fire.
Returning to the United States, through his series of parties in New York, Storm Rave, he unknowingly fathered a culture in this country that continues to be a source for new and innovative sounds and experiences for dance music worldwide.

To this day, with a musical influence that spans multiple generations, he continues to create and inspire through collaboration on all levels of the industry in his never-ending quest to advance open-mindedness about and towards dance music and culture throughout the world.

With as extensive a career as he has witnessed so far, and as diverse an artist as he is, it would be hard to put into words exactly who he is now. In his own words, "I'm not the same person I was 5 minutes ago, nevermind 5 years ago." If you really want to know more about Frankie Bones, the best thing to do is to read his own words on MySpace. The five entries in his Blog will lay it all down for you while you check out some of the music he has made. Then come out on Friday the 13th in Kansas City and meet the man and let him play some music for you, in a way you have never heard it before, in a way that can only be Frankie Bones!