nostalgia for the future 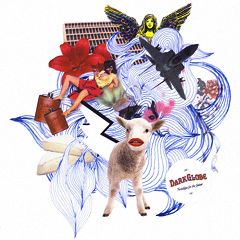 Justin Kleinfeld ~ With the recent release of critically acclaimed artist albums from lostep, Sissy and The Remote and a fabulous ten year anniversary compilation, Global Underground is on a role. Capitalizing on this momentum, the next release for Global Underground’s fledgling GU Music artist imprint is Dark Globe’s much anticipated artist album Nostalgia For The Future. This eclectic release features collaborations with Amanda Ghost, Boy George, Television’s Tom Verlaine, Julie Thompson, Imogen Andrews, and more.

Much like the previous releases on the GU Music, Dark Globe carves out a style that doesn’t sound like what anyone else is currently doing musically. While the base is centered on a blend of downtempo, breaks and pop, the thing that really sets Dark Globe apart from other electronic based acts is their songwriting. These songs aren’t to be considered beats and rhythms made for the dance floor – that doesn’t do this album any justice. Rather, the songs are structured to conjure up deep human emotion. “Atoms (Featuring Boy George)” is a true electronic ballad complete with marvelous strings, piano and weepy vocals. Lead single “Break My World (Featuring Amanda Ghost)” is an epic meeting of powerful vocals and smart programming, while “For Raymond (featuring Julie Thompson)” enters lazy / hazy trip-hop territory. Instrumental tracks “Fever Electric” and “Stray Birds” are thought provoking and provide a score for the film that runs inside your head. Simply put, Nostalgia For The Future is something you need to hear.

The Dark Globe story began somewhere in the early 90s when Pete Diggens, drummer in psych punk band Electric Sex Circus, decided enough was enough. Touring with the likes of Blur and giving the Manic Street Preachers an early support slot was no longer musically fulfilling. Meanwhile, over in the North Kent suburbs, childhood friend and future fellow Dark Glober Matt Frost had started producing and releasing electro records. Reuniting through a love of noise, sampling and Public Enemy, the two formed the musical partnership that we know today. "Public Enemy's message was cool but the thing that we both connected over was Terminator X's industrial funk," recalls Matt. "Everyone else was into Stone Roses and Soup Dragons and we'd be trying to be North Kent's answer to The Bomb Squad. Big, loud, Hank Shocklee noise: industrial, violent and aggressive." 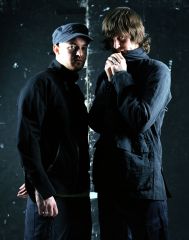 Pete's love of melodies and Matt's love of grooves is the essence of Dark Globe's digital pop vision. As a classically trained guitarist and trombonist, Pete's influences span English composer Vaughn Williams, Brian Wilson and legendary romantic Scott Walker. Matt's childhood in Nigeria, meanwhile, has inspired a love of African drumming and he points to DJ Premier, Hip- Hop grooves and Police drummer Stuart Copeland as key influences. Along the way, their filthy breakbeat funk has soundtracked Lara Croft: The Cradle of Life, they’ve delivered inspired remixies for the likes of Orbital and Two Lone Swordsmen and if you profess to know your dance music history then you'll know that Dark Globe are responsible for making the first ever breakbeat record, “Mondo Scurro.”