let me see your booty bounce 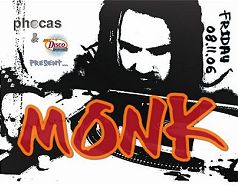 Nathan McWaters ~ photos by joe & todd ~ Let me see your booty bounce! If any single sentence sums up the evening of the 11th of August at the Grand Emporium in Kansas City, Missouri, I think that one covers it.

This was the first club, first set, and first event I’ve ever attended in the Midwest. Up on leave from Fort Hood and visiting “yon olde pal” David McGlothlin before my next tour in Iraq, it seemed the thing to do to not blow off phocas bringing in DJ Monk as the headliner for what was promised to be an evening of eclecticism the likes of which are seen by few yet spoken of often. I had very few expectations for this, since I knew little to nothing about Monk except for the work he’d done with Rabbit In The Moon, so I decided on the outset to throw out any kind of preconceived notion of how this might go down and just roll with it as it came. That was probably wishful thinking on my part, because while I may not have had expectations, I most certainly had desires.

I went ahead and read up a little on Monk just because I’m a curious kind of cat about things like this, and in spite of the bio, there was still no way to judge just what the man was going to unleash on Grand Emporium. With the local duo Cold Front opening, it was a given that the lead-in was going to involve breaks, lasers, more breaks, more lasers, and did I mention breaks? Judging from prior knowledge with RITM, it was a toss-up as to what Monk would do, even with a breakbeat opener. We arrived on scene at about 2230, reasonably early yet with an air of just not being rushed for things. 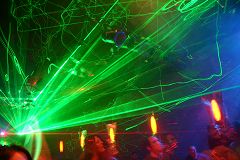 Cold Front was up and spinning, and it was definitely breaks. There were also definitely lasers, many many lasers. Phocas had said there was going to be quite the laser rig for this event, and they weren’t kidding. I hadn’t seen that many lasers in one place since The Crystal Method at Antro in San Antonio, where I was certain that I was going to catch one in the eyeball before that night was out, and Grand Emporium is a much smaller venue than Antro. The place looked like the Death Star trench run was going on, and we had been booked seats strapped to the front of Lord Vader’s TIE fighter for the floor show. It was pretty to see, and made my camera have so many fits that I gave up trying to take pictures. I left those to the heavy hitters present.

In the midst of the light-amplified-stimulated-emitted-radiation, Cold Front was dropping a breaks set that was pretty solid. Aside from some technical issues with the equipment at some really bad times that put a dint on the performance’s polish, Cold Front weathered their storm well, and the crowd built up during their set as the evening progressed. The only thing was, what Cold Front was dropping wasn’t doing a whole lot for me. It was almost-fluffy party music, and while the crowd was clearly enjoying it, I personally got little to no emotional satisfaction from it. Admittedly, I lean more towards the grittier side of EDM, deep and dark. 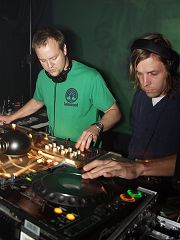 As their set progressed and the technicals were ironed out, RJ Bass and DJ Prato started trading off deck time, which would have livened things up pretty well had they been doing it as a “vs.” faceoff as opposed to continuing the light and airy stuff they were dropping. So while the crowd was amping to it, and the set was well-mixed and well-blended, from a personal standpoint it was like expecting a double-espresso mocha and getting Kool-Aid instead. By the time Monk showed up, I think I had gone through three bottles of water and gone to find an ATM just to catch a break from the PLUR. When I got back, I was ready for some Monk to throw down serious tech-trance, DnB, and house to drag this party into a much dimmer light.

As it turns out, Cold Front’s set was the perfect opener for Monk. His transition right off of Cold Front’s last track was a beautiful piece of break-work. The Dreadlocked One built that sucker up like Rome, and then promptly pillaged it.

For the first ten minutes of Monk’s set, it was Booty House. I was astounded. The crowd was going wild for it, and I was dumbfounded. I understood that Monk came pre-warned that there was a significant hip-hop influence to a lot of his work, and that’s not necessarily a bad thing when crafted into EDM, provided the mixing is tight, the beat is thumping, and it doesn’t fall victim to redundancy. Booty House for ten solid minutes, followed by a continuation of basically what Cold Front had dropped, and I started wondering where RITM was. The crowd was filling the floor, though, pausing only to hit the bar and then return to the floor. Lasers were flying everywhere, and Monk was dropping what had to have been personal mixes of his own crafting, including a mix of Bubba Sparxxx w/ Yin-Yang Twins “Ms. New Booty” blended with Salt ‘n Pepa’s “Push It” that even I found fascinatingly well-blended. Fun was being had by all. . .but it wasn’t doing a darn thing for me.

The technical difficulties that had given Cold Front a touch of trouble didn’t rear up for Monk, though, and he dropped hip-hop track after hip-hop track without pause or delay, treated them through his personal breaks-shaker and sprinkled it all over the dish. Let no one say he doesn’t know his business, and the crowd 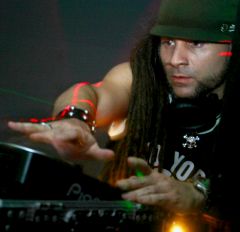 was proving it most adequately. He gave them exactly what they wanted. He is a consummate showman, the lasers bothered him not a bit, and he was clearly having a good time absorbing the love the crowd was giving back to him. For me, the inner-EDMer in me who demands satisfaction was left holding the begging bowl and plaintively crying out for more, while the crowd around me feasted on cotton candy.


Nevertheless, the crowd was extremely well-pleased, Grand Emporium wasn’t exactly gutted and emptied by my disappointments, and I don’t think Monk or Cold Front had many or any complaints to voice about the venue or the participation level of those present. If club sets like what I’ve described are definitely your thing, you would have had a thrill and a half with the kind of stuff Cold Front and Monk were bringing to the floor. This jaded Texan may not have gotten the transcendent experience he wanted from an RITM founder, but that shouldn’t sway a soul if you’re looking for something else from a set.