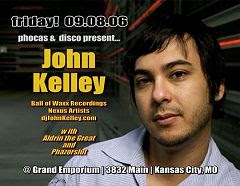 Following the huge success of Nigel Richards and Monk of Rabbit in the Moon, this third event will be a very special engagement with internationally acclaimed West Coast Breaks pioneer, John Kelley!

Last appearing at the first Chaos Theory party, the dance floor swelled with thousands of dancers, all grooovin to his signature "Desert Breaks".

Breaking out of the Desert, he will be coming immediately following his performance at this year's Burning Man Festival in Nevada. In the more intimate setting of the Kansas City's First House of Music, the Grand Emporium this will be a rare opportunity for Kansas City to witness a true legend up close and personal.
For those that love to dance, this will be a night of musical beauty and genius that will be remembered for a very long time to come! Don't miss this chance! 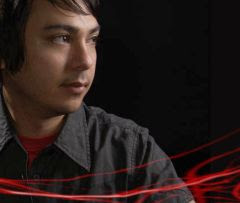 John Kelley was originally known for his sets at Full Moon Gatherings. The influential series of raves held in the deserts outside Los Angeles during the mid-'90s created an emergent sound, led by breakout producers like Crystal Method, Überzone, Bassbin Twins, and Electric Skychurch. Fused with the breakbeat genius of UK acts such as Leftfield and Underworld, Kelley pushed the intensely funky, hard sound of breakbeat techno from the underground into the masses.

For the past decade, Los Angeles native John Kelley has been considered one of North America’s foremost breaks DJs - a true pioneer of the West Coast sound. Over the past few years, he has been busy perfecting a selection of edgy, well-crafted tracks that combine his signature desert breaks with a new flavor of hard tech-hop and broken beats. The release of his debut artist album, “A Night in the Park”, marks a new chapter in Kelley’s long-standing career and, most notably, his transformation from DJ to world-class producer.

In 1996, Kelley released, Funkydesertbreaks, his first mix album with Moonshine Music patterned after his desert sets. The compilation became an instant hit, sparked a US tour and spawned a sequel one year later. With 1998’s “Knee Deep”, he exhibited a transition into a more club-friendly mix of house, techno, trance and breakbeats. The release of “High Desert Soundsystem” and “High Desert Soundsystem 2”, released in 1999 and 2000 launched a number of tours with The Crystal Method, Orbital, Carl Cox, Frankie Bones, Darude, and Christopher Lawrence. The well received mix, “United DJs of America 19”, followed in 2001 and went on to become nominated at the 2002 Winter Music Conference as one of the best DJ mix albums of 2001.

After five grueling years on tour, Kelley began to focus on writing his own music. Along with friend David deLaski (aka Lord Runningclam), Kelley launched the label and production company Ball of Waxx in 2002.
Teaming up with the studio talents of deLaski, Simply Jeff, Moontribe’s Brian Seed, and Brian Saitzyk (aka Eastern Sun), Kelley created a multitude of productions, including two songs on the Ball of Waxx downtempo compilation “Groove Closet”. With the success of the collaboration, Eastern Sun and Kelley followed up in early 2005 with a full-length downtempo CD, “In Emptiness”. Meanwhile, the team of Kelley, Saitzyk and Brian Seed embarked on creating techno breakbeat tracks for John’s debut artist release. 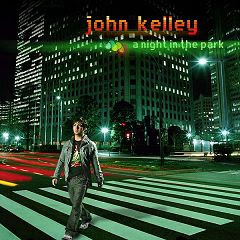 His latest work of art, A Night in the Park, has been praised by beatmasters The Crystal Method as a stellar artist debut from the west coast breaks pioneer. Clearly, this new chapter of Kelleys career has transformed him from renowned DJ to producer on the forefront of the electronic music scene.

Don’t let the title fool you. It’s not the type of music you would listen to while taking a romantic stroll through the park at night with your beloved, holding hands, watching the stars glittering above. This is an intense, gritty, uncompromising hybrid of breakbeat and techno that seems more suited for the soundtrack of a high-speed police chase through the shadowy backstreets of Los Angeles. John Kelley, the legendary pioneer of West Coast breakbeat, has returned to the scene with his debut artist album “A Night in the Park”.

The first track on the album, conveniently titled A Night in the Park, quickly explodes into a spinning cocktail of electro-tinged techno funk. As the album progresses along, the sounds range from the chunky house rhythms of Fat Stacks to the hip-hop inspired turntablism of Funkasaurus.

Breaking things down on the final track, the hypnotic groove of Chopstix almost seems to emerge from the speakers, pulsating and rotating through the listeners ear canals until it retreats back into the dark, edgy depths of the Park.

Armed with a sound that has been described as everything from tribal to techno funk, John Kelley has proven himself to be the leader of American breakbeat techno. Kelley and co-producers, Moontribe DJ Brian Seed, Brian Saitzyk and Simply Jeff, have put together a journey of an album a range of sounds and speeds that come together in a whirlwind of flawless electronic music. The only question is, are you up for the ride?


“A stellar artist debut from west coast breaks pioneer John Kelley...Check it out!”
- The Crystal Method

"Renowned technician and purveyor of many a beat-laden desert sunrise, John Kelley is riding high on wave after wave of praise for his debut artist album "A Night in the Park"...get to your local tune salesman on the double and indulge your eardrums!" - BPM Magazine

"Whatever John Kelley is sprinkling on his Cheerios, every DJ should be given a spoonful or two when it comes time to release their first artist disc. F*ckin Bangin'!- about.com

To learn more about John Kelley and get some free downloads and stuff, check out his web site at djJohnKelley.com,BallofWaxx.com, MoonTribe.org. As well, there's always ... MySpace.com/djJohnKelley.

Be sure to catch John Kelley at the Grand Emporium on Friday, September 8, 2006. Advance tickets for this event can be purchased online at GrooveTickets.com for only $5.

In the meantime, the popular internet radio program, Frosted Breaks provided us with a copy of a mix he did for them just this past February... click HERE to get it now!

Also appearing will be Aldrin the Great, performing a mix of Progressive Drum & Bass and opening the night will be a newly discovered gem in the Dance Music Industry of Kansas City, Phazorslut, doing a bit of ElectroBreaks! You can find out more about these two by either checking the "on decks" column this month, or just check my "Top 8 Friends" on MySpace.com/phocas!