with roland the bastard 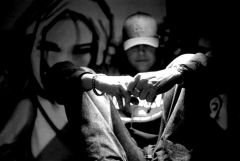 Tim Yoder ~ interview with Rowland the Bastard ~ He’s been called the techno terrorist and his straight to the jugular style of mixing have captivated audiences and rocked dance floors since 1993. The rock star with no guitar is known for playing an eclectic blend of hard percussion, jacking beats, heavy bass lines and acid riffs in his DJ sets. He also punishes his follower’s on vinyl releasing under numerous guises with a few of his monikers as Distek, Rowland the Bastard, RTB, and Tarball and Lungbutter. He has appeared on MTV in three continents and various magazines throughout the planet. Today he stops in for a chat with those of us on phocas.net.


How was your recent North American Tour?

It was ok, not as good as the past ones, but an experience anyway, I had a lot of promoters pull out last minute for various reasons which put stress on the whole thing cause we weren’t sure about the cash flow etc, but I had a couple of adventures plus my girl friend came on part of this tour which was a first also, so it was all good. 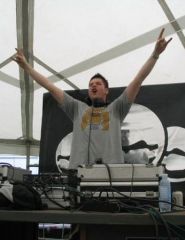 What have you been doing with yourself lately?

Well, lots and nothing really. I moved back to Devon at the end of last year, I now have a nice studio out in the middle of no where, and I’m still DJing and writing music, I guess the biggest thing to happen to me this year was playing on the main stage at the glade festival, it was pretty big and my music went down well so everyone was happy.


So, are you planning any more renegade field parties now that you’re back in Devon?

Have a disused army base at my disposal so maybe...who knows.


You are a very busy man, how do you find time to mix, produce, travel, and relax? Or do you relax?
I don’t really relax, I’m always thinking of new stuff then doing it, I don’t rush around anymore like a nutter though, so I guess what I do is everything a bit slower, lol


Don’t tell me you are getting old?

I’m 35 been partying for as long as I can remember and feeling it! lol


I saw that you plan on Invading Asia…any luck with that lately?

um, yes and no, I have someone in London who has contacts in Japan and she is working on getting the Kinetec DJ's ( or which I’m apart of) regular bookings over there, I cant mention anything else about that cause its a bit political if you know what I mean.


What is this Speed Racer movie? How has that panned out?

nothing happened, I was asked to submit a portfolio to see if I could get the soundtrack contract but at the time I was far to busy pretending I was a rock star and flying around the world DJing so nothing came of it, a chance lost but a 1000 memories gained, john gallop from Cicada Rhythm sorted it out.


And while I am at it, best trance DJ in Canada? I thought you were strictly techno.

In 1999 acid techno was still widely known as acid trance.


What are your plans for the future? Anything we can look forward to? I have a few thoughts but nothing really solid, I would like to move away from techno a bit in my production, well not move away just want to do some electronic stuff that isn't in some category.


DO you still plan on putting out techno; are there any Releases we can look forward to coming out soon?

Yes! I have some releases out this year: infected-023, bionic orange-023, corporate-062 and drumsheenz-001 all coming soon! You can check them out on my website (listed below)


How is the tour for this fall coming? Any places people can come see you perform?

So far I a playing NYC 13th Oct. and possibly Chicago 14th and Toronto 28
For more information, check out bastardloud.com, www.rowlandthebastard.co.uk or MySpace
zine.v1.stories