Spree & ADB ~ Love them or hate them, DJ Spree and MC ADB have been around a longtime and are still entertaining the dance thirsty party people of America. Spree is a name that evokes many feelings some of them can be described as innocence, happiness, and respect. As a DJ he started performing at events in the end of 1997 and has never looked back since. Adb joined him in 1999 after meeting in 1998 at a show called Migration in Lawrence Kansas, ever since they have been inseparable.


DJ Spree is from Minneapolis Minnesota and MC ADB originates from England but now lives in Lincoln Nebraska. The boys felt there was a void in the American rave scene that needed to be filled. At the time countless events were taking place all over the country, but it was virtually impossible to hear a set of Hardcore (Happycore Stateside) let alone with an MC. Out of this notion came the concept of Spree&Adb, the first and only true live hardcore double act with DJ and MC to compliment each other. This same tradition was the staple of the early UK rave scene and gave a new interesting option to ravers and promoters alike. 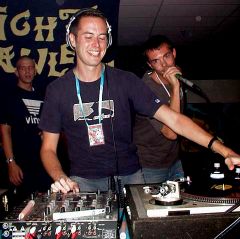 So, seven years on the duo are still headlining shows all over the states, Canada, and the UK with no end in sight. The two have a near fanatical fan base that follows them loyally to every show. It does not matter if the event is held in a barn in Iowa, or an abandoned warehouse in Los Angeles, the crowd always turns into a mad frenzy. This is the main reason why the boys love to still perform, because of the people on the dance floor and the smile on their faces. It may sound cheesy, but it’s true!

2007 was another massive year for the dynamic duo featuring events in Seattle, Minneapolis, Phoenix, Chicago, and more in between. The highlight of the summer had to be performing at the ‘Underground Sounds-Back2theFreak’ event in Murphysboro, IL. Immediately upon arriving we knew this show as going to be special. You can never beat the atmosphere of outdoor festivals in the dark of night.

It was a perfect warm summer evening with a light breeze carrying the sound of beating drums in the air. The only light in the sky was the distant shimmer of bright laser lights flickering and gentle glimmer of glow sticks. The set went brilliantly and the boys left with ears ringing and many happy memories of smiling faces and hands reaching high into the night sky.