Nathan McWaters ~ Austin, TX - July 21, 2006 - Sky Lounge - It could be argued that the EDM scene in Texas tries too hard sometimes. More often than not, the clubs in the major metropolitan cities of Austin, Dallas, Houston, and San Antonio not only war amongst themselves, but between themselves as well.

Multiple clubs in a city mean multiple headlining acts; multiple cities with multiple clubs mean multiple road trips to make. The weekend of 21 July was no exception, as Dallas’ Lizard Lounge booked Christopher Lawrence and Photek on the same weekend as Sky in Austin was hosting the final Proton Sessions Texas for the year 2006. I’d given my word to make it to Sky for the finale in spite of what Dallas was throwing, so I knew my path; Austin, however, was very much divided in loyalty.

Proton Sessions had been such a success in Texas that they brought in three DJs whose ranges cover everything from progressive house to tech-house. Austin dedicated Toddy B to represent the local talent; Dallas dispatched Lance Cashion to unload another Sessions’ worth of “durty, durty beats” into the mix; and Denver house monster Little Mike was summoned from his mountain hold to display his on-deck prowess to whomever in Austin deigned themselves worthy enough to try to handle his style of deep, dark house.

Toddy B opened up at about 2200 hours to a much larger crowd than I had originally anticipated being there. As popular as Proton has become, my reckoning was that Dallas would lure in and consume the crowds with the huge headlining act, and that Sky’s three-story volume of space would find itself woefully intimate and hollow, making this more of a chill lounge-y sort of night with an Afterhours feel. I was mistaken, in a way: while Toddy was dropping a nicely dirty house-y set and schmoozing to the scattered but loyal EDMers dancing on an almost-empty floor, the bar was doing booming business. It was packed with the Austin socialite drinkers club, and the bartenders were working harder than Toddy was.

As Toddy kept spinning, more souls trickled in for the dance floor. It was safe to assume that they were Barcelona-goers and therefore already Toddy’s thralls, but they injected some much-needed life onto the dance floor and drew some attention away from the bar. The horde arrived on the heels of Lance Cashion, who strolled in around 2300 and seemed inordinately pleased at how much crowd there was. When I commented they were there to drink, not for the music, he shrugged it off and said he’d work with it. I stopped stressing about it after that. 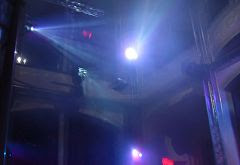 Lance had an almost-comfortable dance floor by the time he stepped up to the plate; Toddy had done his work well, and everyone was amped for Lance to drop a bunch of tracks no one had ever heard of before. He did. The set he unleashed on Sky was better than the one I’d been present for when he spun The Sound out of Barcelona. I could only partially-ID one track out of the set (a D.A.R.Y.L. piece, which seemed to be the crowd pleaser), but it was deep, “durty”, and definitely Lance. The bar-goers gravitated towards the floor as his set continued, and some of Proton’s big names came rolling through as well. Even the five-minute donning of the “minimal scarf” a’ la Berlin’s recent trend in hype didn’t break the mood he brought to the house. Lance was out to have a good time and make sure everyone else did too, even if it involved a little minimal mockery.

Little Mike snuck onto the decks while I was occupied at the bar, so his arrival was similar to the lightning bolt in the middle of the night that just happens to wake you up before the thunder actually hits. He transitioned straight out of Lance’s set and into as filthy a house mix as we had been told he was master of. A flawless mix set, punctuated by casual chain smoking, being invaded by Proton executive-types, camera-wielding groupies, the other DJs, and an Austin crowd that was definitely liking what he was presenting to them on the tables. I couldn’t ID a single track, and didn’t care. He owns his own record shop in Denver, so I didn’t expect to know any of them in any event. He kicked it until about 0300.

In spite of the progression of the night, the crowd never even filled Sky’s first floor to capacity. Nevertheless, the quality of music did not suffer for the lack of those to hear it. Will Proton Sessions return to Texas in 2007? Lips are mum, but odds are I’ll be streaming it in Baghdad.