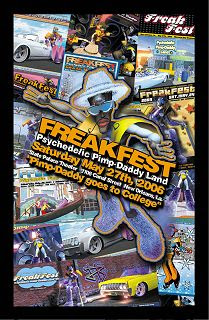 Blasting out of Kansas City early Friday morning on a non-stop 13.5 hour drive, I could barely contain my excitement at covering this year's Freakfest. This annual tradition of Pimpness, presented by Disco Productions is held at the State Palace Theater in New Orleans. Hosting some of the best acts in the World, there is never a disappointing beat for the thousands in attendance.

The night of the party I got there just about the time the doors were opening and was not shocked at all to see lines stretching out in both directions As is typical of events in New Orleans, the lines of those waiting to get in were a melting pot of culture and the feeling in the air that something really exciting was about to happen.

Filtering through the doors, through the entryway and into the main room, the first that struck me was the enormity of the stage setup. Rising probably 15-20 feet above stage level, it dominated the room with video screens on and around it. Dominating the rest of the room, was the familiar pulse of bass that can only be found in places like the State Palace Theater (or the Uptown & Madrid in Kansas City).

People were still slowly filtering in through the pat-downs and there really wasn't much happening at the main stage, so I decided to go upstairs and check that out.

Up on the balcony, locals / regionals were spinning it up for the lobby area. I didn't catch who was playin, but I really liked everything I heard every time I passed through there.
Upstairs, Jungle & Drum & Bass found a perfect home for the night and a charged crowd. For all of the rooms, I couldn't find any lineups posted anywhere, so I couldn't tell you who played where and when, but it was awesome... on all levels.

Donald Glaude did his usual fantastic job of whipping the crowd into a dancing frenzy, but the highlight of the evening for me, Uberzone took the stage at 1:30 am. From the first beat, they turned the place upside down. Raw Power through CDs & Drum Machine, moving a thousand or more to that pulse.

Having no less of an impact, I think Photek was playing about the same time as well, or a little before/after. That was another I hadn't seen since WMC a few years ago and was glad to get the opportunity to see tearin it up again.

Unfortunately, having been there since doors, I ran out of memory at the end of Uberzone and was unable to take any more photos. And the best I can do is you shoulda seen it by the time Jackly & Hyde were through, as well as George Acosta and Concord Dawn. The energy was there from the start to the end at the State's first party to go all night again. I think it was 7 am... or something like that?