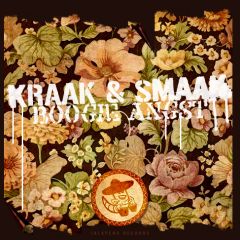 Kraak & Smaak actually take their name from an old Dutch proverb meaning ‘crunchy & tasty’, not any schedule 1 controlled substances in case you were wondering. The debut LP is a slinky adventure into funked up breaks and future jazz rhythms, infused with live-sounding instruments and awash with soul jumping grooves and vocals. Their organic sound is sure to appeal to those of us who still hear the big beat but may have found themselves grown up and opted off the dancefloor. For these misplaced souls, this album will delight their woeful Boogie Angst. This is the perfect soundtrack for sun-drenched summer days.

Boogie Angst kicks off with the hooky twang of “Money in the Bag” then moves into “One of These Days,” a tune that pours honeyed vocals over looped guitars, spiraling trumpets and brass stabs. The balmy summer house sounds of “Keep Me Home” bounds through dusty woodwind and glimmering strings. “Danse Macabre” is a tripping, downbeat track with hauntingly soft vocals, while “5 to 4” takes on an epic Blade Runner style with stark mutated echoes and Middle Eastern pipes. “Mambo Solitario” elegantly curls strings around shuffling samba. And on and on it goes.

The first single "Keep me Home" has been supported by taste-maker KCRW and will be released on iTunes and 12" vinyl on May 16th with mixes by 4Hero and Soul of Man and a hot, hot video on the way.
Twenty-eight-year-old Oscar De Jong, the main knob twiddler in Kraak & Smaak, formed the group in 2003 after a series of chance meetings with the other two. From his exposure to endless types of music as a student at the Music Conservatory in Rotterdam, he now cites his influences as jazz, hip-hop, funk, breakbeat and “all experimental music.” It’s something the other two relate to and have used to help create the musical synergy and energy-charged live shows that have been winning European audiences over ever since.