bottom of the 9th

By phocas June 01, 2006
sherri ~ phocas by todd ~ Hurricanes - 1 / Saints - 0 - I was down in New Orleans this last week for Freakfest and to visit some friends, and was astonished at how little had been done since Katrina hit. Sure Bourbon Street is still there with all of your Daiquiri and Beer venders, but a different story should be told about St. Bernard Parish where the entire parish has been devastated. 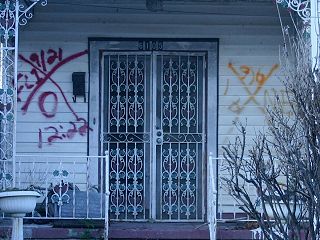 Our friend drove down to the parish for the first time since Katrina with us. She was raised in St. Bernard Parish, she saw the house she grew up in, her grandmothers house, the school she went to and all of the local hangouts that she used to frequent either demolished, if still standing, moved from their original foundation or contaminated by the flood water.

Most of the buildings are still boarded up with the original X on the front of the buildings. The top has the date it was searched, on the left is the unit that searched the dwelling, on the right the code for the type of contamination that was found and of course the bottom number was how many bodies were found inside. Some had the marking of TFW, which means Toxic Flood Water. Those houses will have to be either demolished or if salvageable totally gutted to remove the mold and waste. 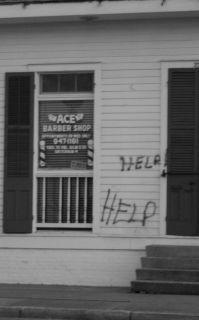 If you have never experienced a natural disaster or been to war, this site is as close as it gets to it. Almost a year later the smell of death and contaminated water still lingers in the air. The sense of loss for all of the people that have either lost everything they have ever worked for, loved ones or their own lives is overwhelming. Under all of the overpasses there is debris and cars destroyed by the flood. It reminded me of a junkyard. Cars were parked side by side with doors missing, windows missing and sometimes two cars high.

A friend of hers parked his car on Canal St. to keep it safe right before one of the levies broke. When he returned to get his car it was gone. At first he thought it had either been washed away or stolen. After searching for the car, they looked up and found the car sitting in a large tree. The water had risen so high, the car had floated and when the water receded it had landed in the tree.

Our friend was fortunate enough to escape the natural disaster, but is having to live with the aftermath. Her house was robbed several days after the disaster occurred. What is sad is that they didn’t steal the drinking water that was in bottles or the canned food that was in the pantry. They stole knives, jewelry, and other items of value. This was not for self-preservation, it was about the money. She has since been able to go home and get on with her life, however, nobody can replace the heirlooms that were stolen from her home by neighbors.

In her neighborhood there have been trailers set up in driveways for friends and family that had no place to go. Depending on how large your lot is depends on if you can put a trailer on it. Some people had two or three of the trailers alongside their houses some only one. Trailer parks have been established in as many parts as possible with approximately 20 trailers per park, tall chain link fences with barbed wire around the top have been put up for security. There was one tent that I did see that had clothes in boxes for the residents of the parish. That is fine if the residents of St. Bernard Parish were still there. Some have returned, but the ones that have moved on to new lives in new cities are not benefiting from this. 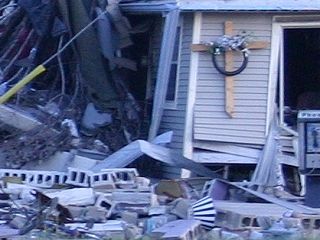 We heard countless stories of water main break that the homeowners, even though the house wa
s destroyed, were being billed for water usage from the break. 30,000 gallons of water was used and the homeowner was required to pay for it. Electric bills from homes that nobody could inhabit and still they were required to pay for it while they were evacuated. People that work every day to make ends meet, were not only robbed physically and emotionally, but also by the utility companies. Yet on the front page of the local newspaper read “Free Internet Access to New Orleans”. Doesn’t do much good if you don’t have electricity or a computer to work on.

Progress needs to move faster for the people in New Orleans. We hear about how well it is progressing, but you can tell, it just isn’t fast enough. I won’t deny that I didn’t see clean up going on down there. Businesses are being rebuilt, streets are being cleared, and the Super Dome will open for the Saints first game of the season. It is the residents that are suffering the most though. With another hurricane season on the way, they need as much help as possible, as quick as possible.
Some facts about the current situation:
Since the disaster, numerous web sites have been set up for Hurricane relief, including one by the Electronic Music Dance Industry, DanceCommunityCares.org. You can always drop by there to see what you can do, or just visit your local Red Cross.