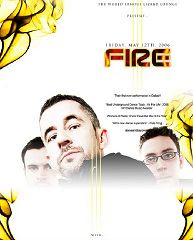 Nathan McWaters ~ Dallas, TX - One of Dallas’ oldest and most notable venues, The Lizard Lounge has a manifold personality to it that only Dallas can generate in a venue. On Thursdays and Sundays, it even has a different name, albeit a more disreputable and sinister one: The Church. I’ve been a longtime attendee of this club, but mostly of its Church side, the side of the darker, industrial, electro goth-tech vampire-wannabe crowd, who go to angst, listen to eerie tunes, wear a lot of black, rave with razors between their lips while waving glowsticks or LED lights, and are almost unanimously looking to score a quick fix and an escape from reality into a place where they can scream and still be alive enough to feel it.

DJ Irene likes to play at The Church, but she’s a patsy compared to residents like DJ Virus. They knew my face at The Church under a different name, but that was a long time ago and I doubted they’d recognize me now. I can’t look at this seedy building in one of Dallas’ oft-forgotten side roads just a stone’s throw from I-35S and the Dallas downtown skyline without having to dwell on The Church.

Still, the schizophrenia of Lizard Lounge owes its lifeblood to the goth-tech side, so it never really shuts that part of itself down; instead, it splits into two to accommodate both: FIRE, and the Video Bar. Over half the DJs mentioned in the flyer above weren’t there to spin for FIRE; they were there for the industrial half of the venue, to challenge FIRE’s trance with hardhouse/industrial from the Video Bar. It doesn’t help matters that both sides of Lizard Lounge possess arguably the two best sound systems of the EDM venues in Dallas.
Every other day of the week, Lizard Lounge is Lizard Lounge, and it has drawn names from around the globe to grace its happier, plurrier side with EDM of all types and persuasions. I had the opportunity to catch James Zabiela here last year on the FIRE side, and it was a party the likes of which I’ve yet to repeat; he’s one of a kind, after all. Tonight, Lizard Lounge brought out the tie-dyed carpet for another one of a kind event, and that’s Above & Beyond, a trance trio from England, for their first-ever gig in Dallas, perhaps even their first-ever gig in Texas. Above & Beyond have stormed the trance world with sets that have sold out clubs all over the globe, rocked WMC’06, released their first album “Tri-State” just about a month or so ago, and rank in the Top 25 on DJList.com. I expected to get my ass handed to me with a side of mustard; I even anticipated it.

I showed up on schedule for this one, if only because this was my chance to get a listen in on some of Dallas’ local talent live. The opener was Dylan StClair, one of FIRE’s residents, and it wasn’t hard to see why. He decided to give his opening for Above & Beyond a progressive trance flavor, very much reminiscent to me of Deep Dish’s style; same kind of energy, tempo, etc. All in all, a pretty tight set. I admit I strayed on several occasions onto the other side of the house during his set, to hear Fabian Bates and BaZar throw down some thumping industrial-electro tech that was seriously flowing, but Dylan was maintaining the larger crowd, even if it took them almost an hour to finally get into the pit. Imagine, if you will, something like seventy people just lounging around while an act like Deep Dish drops sick tracks like there’s no tomorrow. I felt pretty bad for Dylan at that point, even though the crowd was growing at a rapid rate, but then Lizard Lounge unleashed their dancers onto the stages, and Dylan dropped Aquagen + Warp Bros. – Blood Rave (Bloodbath Mix), and that changed the whole thing. Suddenly, the pit was filled with people, and the overflow was in the seating area and on the second floor, and it was like the Hallelujah chorus from Handel’s “Messiah”. . .albeit a progressive mix.

Near the end of Dylan’s session, FIRE jumped us with some sort of interpretive dance routine made up of Grecian deities. I was a little peeved that they had to kick Lizard Lounge’s dancers offstage to make space for them; I particularly annoyed by how they ended up mis-cueing Dylan into a big fat trainwreck, but he took it all in stride and kept on spinning. I can say this about Dylan StClair: the man loves his work. The initial audience response fed directly off of him, and he was into the music he was dropping with gusto. The gods and goddesses vanished before Above & Beyond came on, though, and with the dancers reestablished in their zones, things were all nicely prepped and packaged.

At midnight, the pumpkin turned into a stagecoach, and Above & Beyond made their appearance. Only two of them decided to show for this one; not sure where Paavo was, but Jono and Tony were more than adequate for what they had in store for Dallas. From their ease of transition into their set, to their almost instant rapport with the crowd, Above & Beyond proved why their rise in the EDM community has been as lofty as their name. A lot of their set came straight off of “Tri-State”, which was to be expected, but they held no bones about using remixes of their tracks instead of originals.

They also tactically inserted material from some of their older works into the newer, vocal tracks that “Tri-State” boasts, which was a real treat to see; having almost 300 people singing the lyrics to Home while people waved cigarette lighters, to them turning it all around and following that up with No One On Earth (Gabriel & Dresden Dub). I ran the batteries in the camera out and had to run to the truck to get more, and I just kept on shooting, trying to capture the energy that these guys were generating and that the crowd was returning. Seamless mixing and a constant tempo throughout all three hours of their set. The closing tune of their night, the one that brought the whole club to their feet to scream Above & Beyond’s accolades: Oceanlab – Satellite (Above & Beyond Progressive Mix).

I felt sorry for Frankieboy, to have to close for a set like that, but he smiled through it and broke out the vinyl, and he ended the night with a hardcore set that well and truly made me blink. I only caught the opening half of it, as my pumpkin time had come and gone and I still had the drive to make back to Hood, but from the way things looked as I headed out onto I-35S, Frankieboy had things well under control, and the pit was kept packed even through A&B’s autograph session on the second floor. In the Video Bar, the hardcore goths not into the trance scene maintained their vigil, probably all the way until 0400, and they seemed content enough. A good night for all, I suppose.

It’ll be a long month-and-a-half before I get to see another gig, so here’s to hoping this one’s buzz lasts a good, long while. Above & Beyond – “Tri-State”, available in stores, on iTunes, and in other such sundry merchandising establishments now. See them if you’re able; if you aren’t, pray that you become so.
zine.v1.stories