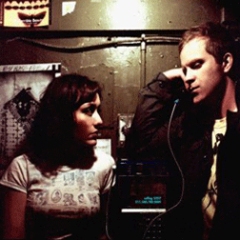 Justin Kleinfeld ~ image courtesy of Global Underground ~ Somewhere in a recording studio in Toronto, Canada, David Trusz and Johanne Williams are waking to the sound of a click track. They are using the heat generated by vintage synthesizers to keep warm, and the warm glow of three computer screens to guide their way. Their skin is pale from a lack of sunlight and their retinas have Pro Tools waveforms permanently burned in. Entrenched in a throwback operation of sorts, Trusz and Williams represent Canada's latest electronic music export, Sissy, and they are on a mission to fight the digital revolution. Sissy's debut album, All Under, is set for release this spring, licensed to GU Music.

Creating music and lyrics based on pure, raw emotion, Sissy exploit the best of new school technology, while leaning heavily on older gear and instruments for their unique character and color. Moogs and Oberheims rumble, tape delay machines echo into oblivion while vocals weave in, out, through, under, and above. Dark, moody foundations serve Williams’ distinctive vocal and clever songwriting, nowhere more evident than the album's first single, "I See You", an eerie, prog/electro driver slowed down 20 bpm. “In The Dark”, one of the album's more floor friendly cuts, features a blacker than black bassline, glorious retro synths, and a serenely twisted vocal. The tracks are versatile – gentle enough for a chic lounge, yet sinister enough for the dirtiest of electro clubs. Impossible to categorize, All Under is the product of a duo inspired by 80's synth bands, early US Hip Hop, UK Trip Hop, and the current crop of breaks and progressive producers.

As a solo artist, David Trusz has released several singles across many of the world's most respected electronic labels, while as a remixer has lent his sound to Groove Armada, Trafik and The Spoons. Johanne Williams has appeared as a vocalist on several commercial releases on labels in the UK and the US, and has spent the last year preparing material for Sissy's debut. With smart and sophisticated electronic music making noise across the globe, the timing of All Under appears to be perfect. Sissy look forward to a year of touring, video production, and the continued accumulation of vintage weapons.
For the more information on Sissy visit GlobalUnderground.co.uk or RephlektorInk.com
zine.v1.stories