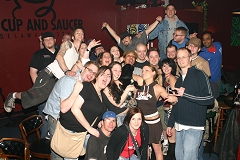 This month's cover comes from out in San Francisco. Mike Zelezak got this one while at Electro Techno Disco Popsicle. That event was just huge. And they are planning more like it. I definitely want to try and make it out there soon, especially after reading the bit this month on Summer Music Conference.


The shot for this column was one that Joe of everyone that stayed for the final beat at the last night of the Wednesday Perk at The Cup & Saucer in Kansas City, MO. After a decision by the owners to close their doors, a four-year tradition ended suddenly and unexpectedly. In this little room in Kansas City's River Market District, DJ cQuence with the help of others along the way, hosted guest Turntablists, both local and from around the country. Consequently, this cozy, unassuming little coffee shop quickly became a staple of the Electronic Music Culture in Kansas City and to me, will always be one of the best nights ever.

Everyone contributed some great glimpses of what's going on this month. We brought a new writer on board, Nathan McWaters with insight into a couple of events he had the opportunity to catch in Austin. Joe spent some time out of town this past month, first shooting with Brian in Springfield at Terminal Groove and then running up to Minneapolis with Andrew for some shots at Dreamscape. Brian also sent us some pix from a few shows in St Louis, such as Julius Papp, and is planning to cover more events in the coming months.

For me, I dropped in a couple of places I hadn't been to in awhile this month, like The Grand Emporium and Empire Room. In fact, the one time I should have had my camera with me, I didn't. One Friday at The Empire Room, I was stunned and caught without camera, as I witnessed guest DJ Shadowrunner holding the dance floor in the palm of his hand. Stirring up some wicked Trance, the packed house was eating it up when I walked in. We're not talking about cheesball anthems, though there was one or two that got kinda close. It was just good solid Trance.

The month ended solid too in Kansas City. Psidream, who was featured in last month's issue made an appearance at Fourmation to a good crowd at The Hangout. The very next night Green Velvet played to a full house, and DJ P again the next week at Kabal Restaurant & Nightclub. At Balanca's the very same night the , AmJanda (of Jack & Jill), Nick Steady & Mage were causing a stir among the locals with a great little crowd of their own!

Spring has only just sprung and the events are popping up almost as quick as the dandelions. We've already got a full month scheduled for our little Tuesday weekly at Balanca's and are in planning process on a couple of other things. In the meantime, some of the upcoming events that are being planned here in Kansas City, the MidWest, as well as across the country are gonna blow you away. Next month's issue might even be a couple days late because of one such event, in a land not-so-far-away.

see ya on the dance floor!
:P
~phocas~
zine.v1.stories