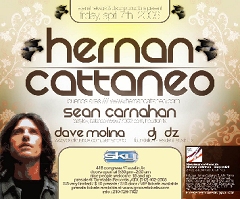 Nathan McWaters ~ Austin, TX - 04.07.06 - I won’t lie to you: I got to this gig late. Not just a little late, mind, but a lotta late. As in, the doors to Sky, one of my favorite Austin clubs, opened at 2100, but yours truly didn’t walk through those doors with a VIP bracelet on his arm until 2230, well after things had begun cooking inside. There’s a long and dramatic story behind that which I will spare you, but needless to say I was already torqued off and looking to start having some nice hard progressive soothe the inner beast, who despises being late to anywhere. I expected Hernan Cattaneo to provide precisely that: dirty, hard, dark prog.

As you can plainly see, the initial billing for this event was much different than what actually happened. To make a long story short, Sean Carnahan had to bow out for reasons unknown, and Matthias replaced him. DJ DZ, Sky’s resident, politely stepped aside for the other surprise of the evening. More to follow about that.

The first thing I noticed was that Dave Molina and Matthias were behind the decks at the same time, something I certainly did not expect from the report of the timeslots for the openers prior to Hernan. Dave and Matthias were dropping sick track after sick track of some proggy-minimal-ish tunes to nigh-perfection, and I’d already missed half of their set. Unfortunately for them, the Legion of the Dead were in force at Sky, because those hosers were too interested in watching King Kong instead. I admit I was a little upset by what seemed to me to be a waste of good tracks on a group of deadbeats, but as time went on people began gravitating towards the floor and basking in what Matthias and Dave were radiating. So for the last, say, fifteen or twenty minutes, there was life in Sky as the two tag-teamed people away from the plasma TVs and the bars and onto the floor.

At 2300, some guy in a green hat and white T-shirt strolled up onto the DJ booth with Dave and Matthias, and my confusion began to grow. It was way too early for Hernan Cattaneo, and this cat was obviously not Argentinian or possessing of Hernan’s hair. I had zero clue as to whom this person was, but Matthias turned the decks over to him without blinking and it came to my attention that the DJ roster had changed significantly from what we were told it would be.

So this guy puts the headphones on, and then the sickness just gets insane. After about ten minutes, I ask Dave who this guy is, because he’s crazy good. Definitely not a run-of-the-mill walk-in. Dave patiently explains to me that he’s Randall Jones.

Randall Jones, as in Tigerhook’s Randall Jones. The same Randall Jones who had a track appear on Renaissance: The Masters Vol.2. For a surprise, he was definitely worth it. I don’t really know what to call what he was dropping on us; it was almost an electro-progressive house blend with a good helping of breaks thrown in. Point is that his set was twick and sisted and someone should have recorded it. Randall smashed the entire club into a semi-psychotic frenzy, and while he was playing Hernan showed up. Now, I told myself I wasn’t going to compare this gig to Ferry Corsten’s from back in March (same venue), but I’m going to have to, if only to bring to light the vast differences between the two, and it begins with public relations. Hernan tiptoed through the crowd with one guy as his entourage, unlike Ferry who rolled with three or four guys clearing the way for him. Hernan slipped up, chatted with Randall for a brief moment or two, smiled as Randall warped and twisted the tunes as he saw fit, and was clearly getting off on it, and then Hernan did something I didn’t think I’d ever see a major DJ do:

He went into the crowd and mingled. Half an hour before he’s supposed to do his thing and he was out on the floor signing stuff, shaking hands, and taking pictures with people. Ferry had waited until after his set to do that, and he never mingled. It was neat from a “peon worshipping at the image of the master” perspective.
Randall wasn’t stopping, and even when Hernan cames back to the booth at 0100, he was in no hurry to assume control. After a little puttering and chatting, Randall turned over the tables to the strident howls of a very appreciative audience and Hernan proceeded to take the club to an entirely different place: the Dark Side.

Hernan proved full well why Renaissance called his series “The Masters”. That man can thrash a club. Very different energy than Ferry Corsten; where Ferry was almost brutal, Hernan was subtle, and where Ferry was chill, Hernan dropped bombs. Those who were there were putty for his grooves for the next two hours.  Hernan crushed the club until about 0300, and then did an encore with the house lights on and blazing; people who shouldn’t have been half-naked were waving their shirts in his face and chanting the soccer “Ole’ Ole’” thing, and it looked to me like he was just eating it up. I don’t think he broke a sweat the whole time, either.

Word on the street is that Hernan called Sky’s owner the following afternoon and said that the Austin gig was the best one he had done yet on his current tour. He may just say that about all the venues he plays, I don’t know, but he made us all believe it anyway. Look for Hernan Cattaneo – Renaissance presents Sequential 2 x CD and Download, due for release on 09May2006, and you may just catch a piece of what he served Sky.
zine.v1.stories