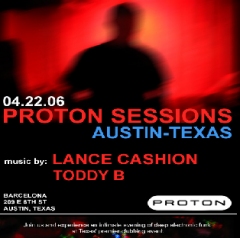 Nathan McWaters ~ Austin, TX - 04.22.06 - This is one of those gigs a person just tends to blunder into. I wasn’t initially supposed to be in Austin (or even in Texas, for that matter) for this Texas-born and bred installment of Proton Sessions – The Sound, mixed and recorded live at a less-than-famous and reasonably-new venue in downtown Austin called Barcelona, but circumstances bearing to the call of duty halted my weekend adventure to Wichita, KS dead in its tracks, so on literally less than twelve hours’ planning, I decided to treat myself and support one of my longtime favorite Texas DJs. It gets pretty hard to not develop complimentary attachments to local talent when you’ve streamed them over a DSL NiprNet connection in Fallujah, and in 2004, Lance Cashion’s The Sound was a staple of sanity for me. I owed, I had to be there.

Barcelona is a new club for me except for the reputations of those who have spun there in the past (Kaskade, James Zabiela, and DJ Rap have been through there), and aside from a glance at Google Maps, I didn’t really have the time or patience to print a map or even write down the address. Logic in Austin is that if its address has “6th St.” in it, it should be easy to find. Barcelona defied that logic for almost an hour and a half, its freshness in the region plainly evident by the lack of listing in the phone book’s business pages or on 411 Information. If any Austin club should ever be nominated for being “Most Underground”, my vote would have to go to Barcelona; God couldn’t find that place unless He knew precisely where to look, or at least had the right side of 6th St. and the building number. This lost lamb thanks Dave McGlothlin for answering his phone at 2200 and hooking a brother up with some quick ten-digit grid coordinates from 551 miles away.

Barcelona resident Toddy B was the opener, and from what I was hearing as I walked in, things weren’t going so hot. It’s not that what he was playing was bad, just that no one except folks who were obviously regulars to his style was feeling it. He had apparently begun with an electro-tech set that just wasn’t getting people out of their seats or away from the bar, and I began to wonder if he was just holding back as a means of hyping up Lance. That changed about ten minutes later, when Toddy started pulling out vinyl to back up the CDJs and his entire set changed into a progressive tech/house-filled bonanza. Almost like magic, the floor was filled with people who were seriously digging his sound, and in spite of his assurance to me later in the evening that he spent most of the first half of his set fighting with the sound system and sounding like shit, I still think he was just holding back until the pre-Lance Cashion crowd rode in. Austin seems to like prog house, though, so go figure.

Toddy kept things bouncing until 2330, when Lance was due in for a promised round of 2345 shots at bar #1 before his midnight start time, but Lance didn’t appear at 2330, or 2345, or even at 2400. Undeterred, Toddy continued spinning on the fly, switching between vinyl and CDJs without flaw and dropping some pretty nasty remixes on the crowd in the process, made one or two complimentary apologies for Lance’s tardiness (rumor has it he was ticketed for speeding while coming down from Ft. Worth, hence the delay), and when Lance finally arrived at 0010, he was immediately forgiven. Toddy didn’t officially turn over the tables until 0030 or so, giving Lance time to settle in and get his setup ready.

With his own home-crafted selection of tunes and a pair of Pioneer CDJ800s, Proton Sessions - The Sound came into being before an already-hyped up audience that had, in the intervening hour and a half, swelled to fill Barcelona to its 150-person capacity. More would flood in as the night progressed. Lance Cashion is known for being one of those DJs whose sets are very hard to pigeonhole into genres. This was notoriously accurate. He did some prog trance, some prog house, some tech house, some almost ambient trance, and wrapped it all together into almost two hours of artistry. The first half was far more chill than how Toddy had left it, and no one seemed to mind, but at about the 38-minute mark Lance started dropping some seriously unique tracks, with a good dose of European blend that the whole club devoured with relish. The groove was so fierce that Lance made it look easy, casually smoking Parliament Lights seemingly without noticing one fight almost break out just to the left of the DJ booth, not to mention the impromptu stripshow happening over by bar #2, hosted by a bunch of guys in bathrobes and sandals. Leave it to Austin to have a crowd that could have easily come from a Rocky Horror Picture Show screening, or have just gotten out of class at UT and gone out for a night on 6th Street and found a free cover club. It didn’t matter; Lance made them all eat out of his hand. I need to carry around a dwarf who’s a savant for track IDs, just because I would love to know the names of some of the Proton exclusive mixes he was unloading on Barcelona. I suspect a tracklisting will appear at some point, and I will rejoice.

After a relentless second half of beats that were sicker than leprosy, the lights came on, and Lance dropped the most requested track of the night: The Church - “Under the Milky Way (Lance Cashion Remix)” as his encore. 200 people in a basement were all on their feet, and you would have had to have been a corpse to not have felt it.

Barcelona had to close up shop by that point, though I sensed the crowd wasn’t ready to let things go just then, but that’s the way it goes. All things must come to an end, even a session of The Sound, and this was no exception, but darn if I didn’t have enough of a buzz to make the drive back up to Fort Hood and stay up into the wee hours of dawn. I was stone sober for this one, too, so take that to the bank.
zine.v1.stories