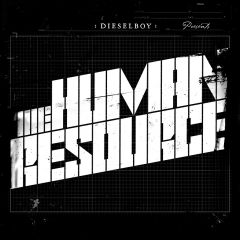 Justin Kleinfeld ~ New York, NY - Step into Dieselboy’s laboratory, April 4, 2006, as he builds the beast known as THE HUMAN RESOURCE – a 2xCD. Disc One “SELECTED WORKS,” is the first CD compilation from Dieselboy’s mighty drum & bass label, HUMAN. This 12-song sonic monster includes club anthems and VIP remixes from )EIB(, DJ Fresh, The Upbeats, Dieselboy + Kaos and more. Disc Two “EVOL INTENT ASSEMBLE THE MONSTER” features a continuous DJ mix from one of America’s top d’n’b DJ/producer crews, Evol Intent, hand-picked by Dieselboy to stitch together some of the best of the HUMAN catalog, plus exclusive tracks and remixes from Gridlok, Infiltrata + Hochi, Vector Burn, Dieselboy + Technical Itch and others.

A part of the stateside electronic movement from the very beginning, Dieselboy is hailed as one of the Founding Fathers of American drum ‘n’ bass. His passions for the music and his rigorous touring and production schedules have earned him a slot in that upper pantheon of DJs able to perform to enthusiastic audiences the world over. Dieselboy is consistently rated as one of America’s Favorite DJs in the annual BPM Magazine reader’s poll, and received a nomination for Best Breakthrough DJ at the 2003 American Dancestar Awards. Dieselboy’s most recent mix CD, 2004’s The Dungeonmaster’s Guide, received critical acclaim for challenging and breaking down the barriers between drum ‘n’ bass, techno, house, trance/progressive. Approaching some of the most notable progressive artists in the world - including BT, Sasha, and Tiesto, as well as techno prodigy and Philly compatriot Josh Wink - Dieselboy embarked on a mission to create something unique by having these artists’ tunes remixed by a slew of the largest names and hottest up-and-coming drum ‘n’ bass producers.

Founded in early 2002, the primary design behind Dieselboy’s label, HUMAN Imprint, has been explicit: first, to provide an outlet for the release of Dieselboy’s material, second, to promote domestic drum and bass, and finally, to convey Dieselboy’s distinct vision, concept and aesthetic. At HUMAN Imprint, output is never rushed; everything proceeds organically – from Dieselboy’s venerable Project HUMAN 2xCD, through the numerous vinyl releases, to the ambitious Dungeonmaster’s Guide 2xCD, the maxim is always ‘Excellence First.’ The 2xCD HUMAN RESOURCE is nothing less than a comprehensive anthology of HUMAN Imprint’s finest moments to date and blueprint for the future. This particular undertaking has literally been years in the making. As a unique addition to the CD1 unmixed label compilation, the fine gentlemen of Evol Intent have been hard at work in their laboratory stitching together various bits and pieces from HUMAN Imprint’s varied catalogue for the accompanying DJ-mixed CD2. The end result is monstrous…

Atlanta’s Evol Intent are among the greatest purveyors of the incendiary, modern jungle sound. Operating as a three-piece power troupe (comprised of Knick, Gigantor and the Enemy), they have produced some of the most ephemeral and progressive drum ‘n' bass to date. Birthed out of the hardcore-punk culture, the trio developed a unique method for wrecking sound systems. The Evol Intent approach is unmistakable - It utilizes incredibly dynamic drum mechanics, razor sharp edits, sawtooth synths and an element of discord resonant of their punk youth. In a very short period of time the group has amassed a substantial discography while recording for their own Evol Intent label as well as numerous prestigious imprints such as Renegade Hardware, Outbreak and Human.