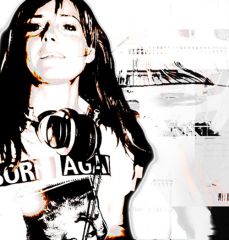 Justin Kleinfeld ~ New York - rephlektor inkorporated is pleased to announce the launch of Interference, a groundbreaking new collaboration between superstar DJ and producer, Sandra Collins, and acclaimed director/VJ Vello Virkhaus. Interference combines world class skills with superlative technology to create a complete aural and visual experience. It will forever change the way you think about clubbing.

Interference integrates over 40 original animated works on DVD, which Collins blends together throughout the night utilizing three Pioneer DVJ-x1 video turntables. The video feed coming from Collins’ DVJ’s is then fed to Virkhaus and remixed along with additional audio reactive animations and live cameras. Utilizing various hardware and software solutions from Apple, Edirol and Brash Live, Virkhaus twists and blends the video streams together. Virkhaus’s primary applications are Modul8, Livid Union, Edirol PR-80 and the CG-8 visual synthesizer. Collins and Virkhaus utilize several different groundbreaking techniques to mix DVD-video and animated footage (much as traditional DJs scratch records.) Combining these mixing styles with Collins genre smashing performance, the duo create a mesmerizing marriage of sight and sound.
“The merger of the visualists and the disc jockeys is going to feed the media hungry youth the kind if interactive stimulation they need to continue to capture their imagination and attendance to electronic music events in the future,” says Virkhaus.

“I knew from the start of my career as a DJ that it’s easy to be become pigeonholed when you regularly perform live and so I’ve always experimented with different styles of music in my shows,” she says. Imagine the experience of such forces combined. Or, rather than simply imagining it, check out the spectacular results at the INTERFERENCE performance nearest you, says Collins.

Interference has been auditioned several times in Los Angeles area clubs and received high marks from fans and DJs alike. Superstar DJ / producer Paul Oakenfold attended a March 11 performance at Avalon Hollywood and was floored by just how ahead of the curve this project is. Check out an EXCLUSIVE link to the Avalon New York City, New Years Eve performance!

The successful execution of the Interference VJ/DJ concept has also led Virkhaus and Collins to be sponsored by Pioneer, Edirol and Brash Live for 2006. Propelled by the enthusiastic response in L.A., Collins and Virkhaus have decided to take their collaboration on the road with several live dates at the 2006 Winter Music conference. Don’t miss Interference on Friday, March 24 @ Crobar (w/ Paul Oakenfold, Hernan Cattaneo) and Saturday, March 25 @ Ultra Carry On (American Airlines Arena). If you can’t be in Miami, look out for more Interference dates later this spring.

Vello Virkhaus has worked on visual content creation and VJd live for a wide range of both mainstream megastars and electronic artists. Vello has been profiled on the Apple Pro video website and won an award from Clubsystems in 2005 for “Best Video System” for Crobar NY. His company V Squared Labs has created and performed visual work for artists such as Sting, Destiny’s Child, Beyonce, 50 cent, Blink 182, Green Day, Bon Jovi, Jay Z and Korn. Vello was also voted by DJ mag UK the #8 VJ in the world.
“Flanked by a stage-wide screen, Korn were backed by dramatic images of TV static, flames, worm-covered skulls, maggots, and images from their music videos created by Vello Virkhaus…Images of the group continued to project in front of Korn, and when the crowd's screams reached a crescendo, the screen dropped, revealing the band chugging away at full-throttle. Korn's performance was sonically and visually scorching!”
—MTV.com

Sandra Collins has won numerous awards including “Best DJ” at Dancestar 2003, “Outstanding Electronic Artist” at the Bammie Awards (for her debut album Lost In Time), has tied with Lauren Hill for URB’s “Best Female Artist” and graced the covers of top dance magazines including URB and XLR8. Collins has also received praise from respected publications including The New York Times, Spin, Time Out, BPM, Vibe, Mixmag and Mean Magazine. A tireless experimenter who is always in search of new sounds and platforms for her music, Collins is truly in a class of her own, whether she’s performing to a 5-10,000 person club, a festival or an imitate gallery space.