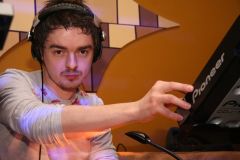 Betty Kang ~ photo by Shaun Williams ~ Due to be realeased in the US on April 25th, 2006, Australia’s EQ Recordings turns up the heat once again with the exciting ninth installment of the Balance DJ mix series, handcrafted to perfection by one of the hottest young stars of the global house scene, Paolo Mojo.

Following Balance 008, the critically-acclaimed “compilation of the year” (M8, 2005) mixed by that other vanguard of neo-house Desyn Masiello, Paolo is set to deliver a genre-defying, funk-infected double CD mix of booty-shaking house, jittery techno, and every wicked groove in between with some classics thrown in for good measure, that turns traditional mix CDs on their head and gives the word “progressive” a whole new meaning.

Paolo Mojo's sound might be difficult to pin down, but this broad, innovative approach to his craft is making him a name on everyone's lips in 2005. His style incorporates elements of house, funk, techno, breaks, electro, disco and acid. “I’ve never understood this 'genre' bollocks” he says. "To me the best DJs always select the best bits from a wide range of sounds and put them together in a way that just makes sense to people."

It's certainly making sense to lots of people at the moment. Already well established for his tweaked out sets with the likes of Tyrant and Sasha at Fabric, and a well thumbed global passport, he's really come to the fore this year thanks to a succession of well received productions on labels such as Alternative Route, Big Love and Sabotage - and one of the best BBC Radio One Essential mix debuts ever.

Tom Pandzic (EQ) states “We’re very excited to have someone of Paolo’s talent on the Balance roster and believe he has the ability to compile a mix that will become another classic release for the series.”
Radio One, Mixmag, DJ Magazine and IDJ have all been quick to cite him as one to watch this year - with his first mix CD 'Heretic' already released in 2005 on Cass’ Sabotage Recordings. Forthcoming remixes and projects with the likes of Alex Neri, Nic Fanciulli, Paul Woolford and Eric Prydz are set to raise his bar even higher.

Yeah baby yeah, no doubt about it, this kid’s got some serious mojo...

“Paolo Mojo is one of the most talented new DJs; he’s a man you’ll be hearing a lot more from.” - John Digweed

“I think (Paolo’s) is one of the best demo cds I have heard for a long time.” - Danny Tenaglia

“He is constantly pushing and finding quality house music. One of the best new DJs for sure.” - Hernan Cattaneo