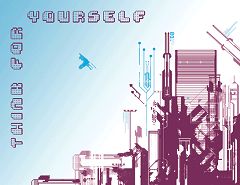 by Brent Crampton ~ Omaha, Ne - Garnering an ascribed "holistic" type of tribal psychedelic party techno, internationally renowned DJ, Woody McBride, will make his way to Omaha on March 16 to perform a live PA set. McBride will spin at Bar 415 (415 S. 13th. St.), with an opening set by Brent Crampton. Music will be from 8 p.m. – 1 a.m., with an $8 cover charge.

From France to Munster and Austria to America, Woody has toured all over Europe, Asia, South and North America bringing his "engaging, inspirational music vision," according to his Web site, www.djesp.com. And while he is on the Think For Yourself Tour, McBride will be making his way back to Omaha.

Bypassing the record bag or CDR’s, McBride is opting instead for a live PA performance. Bringing his vintage synthesizer’s and drum machines, behind McBride’s looping techno patterns, “There is a holistic message of universal connectedness underscoring it all, but it takes shape in the form of the classic death and rebirth model where we must go through the darkness to find healthy and resolved transformation,” McBride said in a Newcity Chicago interview. “What's more, it often contains an unapologetically primal sexuality, engendering a soulfully human quality that transpires from more than the sum of technical mastery or artistic vision,” wrote journalist, Jim Walsh.

While McBride is among an international caliber of DJs, it's his lifestyle that sets him apart from the rest. Taking on the role of a techno shaman, McBride says, “My vision and drive is to liberate people and help them flush themselves out of the matrix-like gestation pods that teach us to be consumers and human garbage cans.”

Always pushing the boundaries of culture and your eardrums, his renowned "Wall of Bass," stands 20 feet high and 150 wide, pumping out a million watts of pulsating sound. Taking this sound system to select parties, McBride was “throwing some of the first and by far most legendary warehouse parties in Minneapolis in the early nineties,” wrote Walsh. “He initiated untold numbers of virgin ears into the realm of worldless techno.”

When McBride isn't performing in DJ booths, you can find his influence in your local record store. With more than a 150 releases and remixes, many of which are on his own label – Communique, McBride has left a deep impact in the world of dance music.
zine.v1.stories