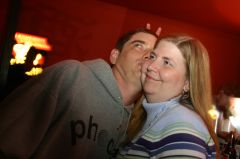 March snuck up on on us this month and none of the folks that were supposed to have done this column followed through, so I thought I would throw one of my old mixes out there.

It was only recently that I stumbled across this mix that I had made for Sherri a couple of years ago. I thought it might be a good anniversary present, but never really gave her this copy with the last 4 or 5 tracks, until now. So, happy 20 babe... let's see where this highway goes, eh?

Honestly, the mix itself is mostly just a bunch of trax that I had on vinyl that she really liked. It's not perfect by any means and I definitely don't know what you would categorize it as. Kinda House... mostly. Whatever you wanna call it, have a listen. The mixer I was using had no channel-by-channel EQ, only one on the master, so the levels are a tiny bit off here and there, but not too much. Hope you dig it.

Here's what in it... track by track
zine.v1.stories