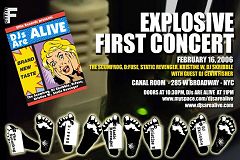 Michael Bradshaw ~ photos by David Wells ~ As the Thursday night crowd at Tribeca’s Canal Room closed around the stage to view the newly formed and moderately hyped, DJ’s Are Alive, something strange happened. No headphones were passed from one selector to the next, no one got on the mic and tried to hype the dance floor for an oncoming DJ. Instead, instruments were picked up, keyboards, drum machines and samplers were warmed to a start with the flick of a switch. Five individuals took to the stage and started to play music - House music.

DJ’s Are Alive, an unfortunately named dream team made up of legendary established DJ’s and producers including, Scumfrog, Static Revenger, D:fuse, Karen W. and DJ Skribble, started to open a can of whoop-ass on New York City Thursday night, the likes of which it had never seen. Unfortunately however, they put the lid back on said whoop-ass can within the first fifteen minutes of the show.
With lyrics like, “Happy people / Gonna have a good time,” “Keep on livin’ your dream!” and “Gimmie some love...,” After a while, even the psycho-happy boys in the crowd were like, “WTF?”
See, anyone listening to DAA’s music is sure to reminded of something very familiar. That’s because their music sounds pretty much like every other house track you’ve ever heard. One is inclined to think that if Disney ever wanted to open a future music wing of Epcot Center, DJ’s Are Alive are definitely the go-to band to play the food court. 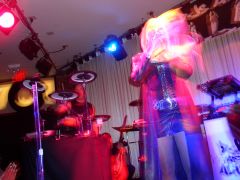 DAA admits via its press release that it is a response to the “rise of laptops and digital files” that have made dance music and DJing “as exciting as watching people check their email.” For this they should be commended because this hurdle they have certainly overcome. DAA’s show is a show. However, in pushing the presentation of House forward by harkening back to it’s origins, they have pulled the music itself back into territory that’s so played out, it’s difficult to stomach for an entire hour.

What’s really disturbing about DAA is that the group is boasted as a “unique exploration into a live DJ’s set,” when, in fact, there is nothing unique about them at all. The project itself is nothing new. Electronic dance music started with groups organized like DAA. Kraftwerk, New Order, even C & C Music Factory to name a few. What separates DJs Are Alive from these pioneers is that DAA isn’t doing anything new. Every peak and every valley of their performance is painfully predictable. Kristin W’s vocals, although adequate, sound no different than the countless wailings of house divas who have come before her. DJ Skribble’s uber-precise record scratching comes off as cliché and the Scumfrog’s guitar riffs stumble through trails clearly already blazed by Basement Jaxx nearly a decade ago.

In some ways, DJs Are Alive is an insult to not only DJ’s but the living as well. As a consortium of renown House DJ’s and producers turned club rockers, DAA should be the talk of the upcoming Winter Music Conference. There is hope that this may actually happen—not because the group is necessarily good, but rather because they beg the question of where the genre of House music is going in the United States and why it’s probably time for it to retool.

For more information about DJ’s Are Alive and to download their debut single, “Gimmie Some Love,” just visit DJsAREALIVE.com!
zine.v1.stories