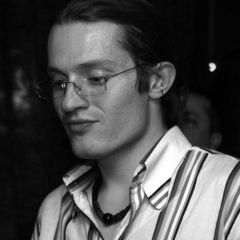 J. Fortune lived in Minneapolis for 5 years before returning to Kansas City after graduating from University of Minnesota. While living in Minneapolis he was exposed to a wide variety of musical concepts, especially techno and acid techno, which is no surprise given Minneapolis’ storied techno scene. Even though those two genres were a huge influence, the pull of the brokenbeat was undeniable. This lead him to starting buying records and searching for his own sound. His musical journey lead him two directions; towards drum & bass and techno influenced by other psychedelic genres. He split his time between both beginning in late 90’s, but decided to devote his time and energy to the brokenbeat a few years ago.

He has performed at clubs and parties all around the greater Midwest playing dates in North Dakota, Minnesota, Wisconsin, Nebraska, Kansas and Missouri. Along the way he has had several residencies in Minneapolis alongside some of the best talent the city has to offer.

Fortune’s goal in all his musical endeavors is to communicate with the crowd the passion he has for music.

This was an important factor in developing the concept behind ‘Fourmation’ –Kansas City’s only weekend club night dedicated to all forms of brokenbeats, be it DnB, breaks, grime or hip-hop. J. Fortune’s production group, Lotus Inq., has been working in partnership with 4Corners Entertainment to take this night from the drawing board to the dance floor. With monthly headliners of the highest calibre, expect big ‘tings from Fourmation.

Fortune’s mix, Return to Shadow, comes out of leftfield with a mix that brings together the classic sounds of the 90’s with the upfront DnB selection he is known for, all while keeping the psy and techno influences he loves. This is a special mix for the ‘Headz.