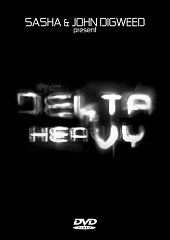 On February 7, System Recordings will release Sasha & John Digweed Present Delta Heavy, a DVD documentation of the most important DJ tour to ever hit America.

I had the opportunity this month to preview this DVD and, if you were there, you might want to get your hands on this one. Those in Kansas City are going to pleasantly surprised at the amount of footage that was shot at the Uptown. Honstly, I expected to see none at all. About 30 minutes into it, bam! It takes you a minute to figure out that it's the Uptown, but that room is unmistakable, especially when the lights go up and they set the camera down on the table facing the crowd.

For those that weren't there, what you missed was probably one of the most groundbreaking electronic music tours, whcih featured the extraordinary DJ talents of Sasha, John Digweed, and Jimmy Van M. Visiting all corners of the States in 2002, the tour - promoted by Clear Channel - was attended by more than 85,000 people in six weeks and was voted by the American public as Best Event at DanceStar USA 2003.

Along with other touring acts such as The Chemical Brothers, The Prodigy and Underworld, Sasha & John Digweed are responsible for America’s mid-90’s dance music explosion. As a launching pad, their monthly residency at New York City’s famed club Twilo was a larger than life event that drew fans from all over the world. This was a cultural phenomenon that lifted the DJs to an almost mythical status across the country and opened the doors for a wave of other top international DJs. Despite releasing several popular mix CDs and playing to crowds in other cities, Sasha & John Digweed couldn’t possibly reach all their fans in a vast land like America. As a result, Sasha & John Digweed’s protégé Jimmy Van M. conceived a massive first-of-its-kind touring electronic music event. The revolutionary event was called Delta Heavy.

Produced and directed by Ben Turner, who has championed electronic music worldwide for 15 years, and executive produced by Sasha & John Digweed themselves, Delta Heavy is a compelling and intimate documentary film that takes the viewer behind the scenes of the largest DJ tour ever mounted in America.

Featuring over an hour of exclusive live footage and interviews plus bonus materials with Sasha, John Digweed and co-creator/opening DJ Jimmy Van M, Delta Heavy is a must-have remembrance for those who were there and an essential purchase for all Sasha & John Digweed fans everywhere.

“This DVD takes you from the middle of the dancefloor to backstage and into the world of Sasha and myself on a 9 week DJ tour across America on a scale that had not been done before and has not been recreated since - this really captures every aspect of a DJs life and then some!” – John Digweed

“The Delta Heavy tour was a landmark moment for electronic music, and it was my ambition to simply shine a light on the creativity that was going on in that period. To work so closely with Sasha and John, two artists not renowned for letting the cameras in close, was a personal career highlight. It’s important the genre’s best moments are documented.” – Ben Turner

DVD Features (for preview, click here)
For the more information on the project check out SystemRecordings.com or RephlektorInk.com or just Go Buy It