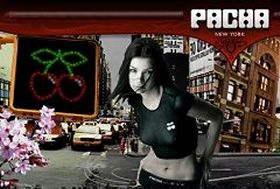 Michael Bradshaw ~ Against the awesome backdrop of the aircraft carrier, U.S.S. Intrepid, New York City’s newest, big-name club venue Pacha is housed in an unimposing warehouse along the Hudson River four blocks west of Times Square. Situated on the fringes Manhattan’s Hell's Kitchen district, Pacha and the accompanying clutches of danceteria-types crowded outside, are as conspicuous in this part of town as a glow stick in a VIP room.

Unlike most clubs residing in industrial locales, Pacha beds in a bustling shipping zone among freight trucks and warehouses, which are active well into the wee hours. Standing in line to enter the club, one can expect to be on the receiving end of more than a few stink-eyes from the tenacious souls working late on the loading docks—This while donning club couture and fighting fashion models for a place beyond the seemingly absurd, velvet ropes.

However, once you’ve paid your $40 cover (!!!) and mantra’d the muck of by-passing hotties out of your aura, you discover why Pacha is the premier clubbing experience favored the world over. With franchises in Buenos Aires, London, Munich and Madrid; plus developing projects in L.A., Singapore and Dubai, the Ibiza-based club chain is, for the international club scene, the gold standard among even the most discriminating clientele. The problem however, is that Pacha NYC only lives up to this reputation by its most essential facilities.

Entrance to the club from the VIP line feels a bit pedestrian at first but this feeling gives over to exhilaration as you empty onto a grand square mezzanine, sprawling above the main dance floor. The floor itself opens to the viewer as a well of light guiding one’s eyes as would a coin plunging into a vast fountain of neon and twirling quasars. The central lighting truss sprouts from the middle of the main dance floor like a tree twisting on its axis, opening into octopus legs, which observed from the mezzanine, rain light in precise jets of cool blues and purples.

Making your way past the many posh satellite rooms (which cost so much to occupy I won’t trouble you, gentle reader, with the numbers) and down the stairs toward the main floor, the thunder of bass assumes a droning effect and the sheer, pulsing violence of an utterly massive sound system dilates the pupils. Equal to that of a perfect night sky both in clarity and magnitude, the Pacha sound system could make even the hammer of Thor wince with inadequacy. 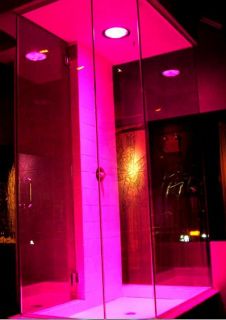 Additionally, there are shower stalls located around the dance floor that one can only assume are supposed to look cool but, unfortunately, the word that comes to mind, even in the presence of girls writhing around in their underwear, is trite. However, located opposite the DJ booth, a series of platforms in which (female) dancers clad in fantastic head dresses and skimpy white chiffon costumes dance in slow, choreographed, tai chi-like movements within a seemingly, falling mist under the aforementioned tree of light. This, is certainly the most impressive element of the Pacha environment.

Pacha’s interior, coupled with the stylings of resident DJ Erick Morrilo, who told DJ Magazine that Pacha NYC will surpass the infamy of Studio 54, makes for what should be the ultimate in New York City clubbing. However, the club came to a dead stop around 1:30am it’s opening night as the New York City police department filed through the doors and ordered party-goers to leave. If Pacha is attempting to capture the true vibe of the underground dance scene, so far it has only been successful in it’s ability to get busted. The club opened again the next evening for it’s Made in Sweden event featuring Steve Angello & Sebastian Ingrosso, but seemed to suffer a significant loss in attendance surely due to internet speculation that the club would not open again for another month. Most postings on New York City message boards categorized the opening as a complete disaster.

Anyone worth their hand-stamp knows the term, “super club” is a dirty word these days, so if “underground” is what Pacha is going for by choosing an off-the-beaten-path location, they still have a ways to go in terms of clientele and innovation. If Pacha is going for posh, they may be well on their way. Posh and underground are two conflicting elements in the dance music scene. Sometimes conflict yields beauty—In this case, it’s bemusement at best. However, if you’re looking for something dazzling, out of the way and you’re not afraid to drop some serious coin, Pacha NYC may be the perfect destination for your next nightlife excursion in the Big Apple.

For more information about Pacha New York, check out their web site at PachaNYC.com.
zine.v1.stories