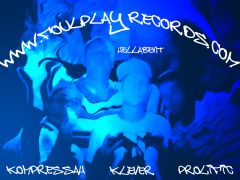 Chris Hudson ~ graphic courtesy of Foulplay Records.com ~ With the release of their 6th 12"- Metaphase, “Winter in May"/Kompressah,"Devil's Tricks", Foul Play Records are quickly emerging as one of the fastest rising U.S. based drum and bass labels. The release features 2 very progressive tracks, and two non-skip scratch grooves, which are a nice tool and a valuable edition. Also crossing over into hip hop, FPR continues to blur lines while putting out cutting edge music.

Prolific is the brain behind the operation, tablist, and a true soldier.

So tell me, what are your roots?

Prolific: That’s a hard question to answer b/c I come from so many different musical backgrounds. I guess for rock it would have been old school Metallica, Megadeath, Slayer just really hard thrash metal. I remember being a young teen spending hours learning Cliff Burton bass solos, so most of my roots come from really fast aggressive music. I didn’t even get into hip hop and DnB until my mid teenage years.

Yeah I always was a fan of dope hip hop tablism bboyism. Drum and bass was just something that came along and grabbed on and wouldn’t let go.

When did DnB come into the picture?

Man I as like 15 this dude just moved to my hometown from L.A. threw me one of R.A.W 's first DNB tapes. I knew then that I would be pursuing that genre as a listener and then as a dj.

Where was your hometown?

I grew up most of my life in Fort Walton Beach, FL. It’s a hidden paradise that not many people know about. Beaches are unexplainable it’s like the 10th best place to live says money magazine. I did spend a couple of years in New Orleans when Disco Donnie’s parties were first popping off. That was a crazy back then. Everybody was coming through there and the parties were insane.

Were you there while the feds were trying to prosocute him?

Actually the night that happened I received a call from this girl I was talking to and she said she got through the front door and then the shakedown. She told me not to show up b/c of the hassle. It was the Hong Kong Fooey party. Things were kind of never was the same after that.

So after N.O., you went back to Florida?

Yeah, by then I was traveling playing shows in a lot of different places. So I basically just lived there during the week working and traveling on the weekend doing shows.

Did you start out as a tablist, or did you spin jungle?

It' funny man I started out just scratching and juggling I didn’t learn to mix until I wanted to play out and you have to be able to blend. So I started mixing hip hop and DNB.

And that's when the bookings started to get regular?

For sure. Promoters always like having tablist at DnB parties’ b/c it get the place hype. Always good to switch it up and try to keep it fresh.

So what producers are on the Foul Play roster at this time?

Yeah he has some fresh sounds and Ideas he just needs to be pointed in the right direction. When he has something come out on wax I know a Lot of people will be diggin it. Also Sabac from Nonphixion is going to be featured on a future hip hop 12" and DnB RMX.

Nice, how did that happen?

My boy Hadji that runs Urban Dwellars, one of the illest clothing company's of all time came up with Sabac. He linked us up. Critical and Madness already were working on a collab w/ Sabac so we did one for Foul Play w/ Klever cutting the hook. Its gonna be Foul Play's premiere hip hop 12". Shortly after we will feature the DNB RMX, that’s gonna be hot that’s for sure.

And when will that be hitting?

I would say the hip hop single will hit Fatbeats end of Jan or early Feb. I would expect the DnB version to be hitting around WMC.

So what factors come into play when you're thinking about putting out a tune?

Lots of things. We try to put concepts into motion have a different sound that people can still vibe to and respect. That’s part of it. We here at Foul Play like super fast wicked drum edits. Another factor is lots of precious space cabbage that’s elevates the mind state. But more importantly just putting out a tune that when people hear it especially for the first time will go look at the label to see who it is or ask what that was tune you dropped. Just pleasing the listeners with a unique sound.

So with all of the American talent that's getting out there and even searched out by overseas producers to put on their labels, do see American DnB getting the respect it deserves??

I'll be honest; we sell a lot of units in France and Germany. Our stores that carry our products in the UK sell decent just don’t have a distro in the UK like we do in other countries so it’s tough to move units there besides the handful of sites/shops that sell our product. But look us Americans still get love I mean look at Evol Intent they have done something with everybody and came up quick. Shows that it doesn’t matter who you are or where you’re from. If you have skills people will support you.
zine.v1.stories