David Goth ~ photos by todd, David Goth, & Shaun Williams ~ Fire is something that can provoke some of the most primal of responses to the human animal. Even seeing the word sends neurons flashing reminding the brain of all its attributes. At its most mundane, fire is light and heat produced through chemical reaction between fuel and oxygen. That simple and dramatic process has made an impression on humanity, due to its destructive nature, its utility and something else that you only get by focusing your attention to the impact on your senses. You see the flickering light, you may feel the heat, perhaps smell and hear it. Fire has long been used in ritual and symbolism. Fire even goes beyond an instinctive respect for it, but also into emotion.

3rd Degree Burn is a group of fire performers that tap into those feelings by performing both fire spinning (also known as "poi"), and breathing fire. Poi is an art related to juggling using balls on ropes, but with fire poi replacing the balls with wicks soaked in fuel and lit. In performances, fire breathing is incredibly dramatic with a bright flash of light, and often times the audience can feel the heat from a safe distance.
They generally use hard driving music to accompany their performances. I've known members of 3rd Degree Burn for a few years, usually from having the fortune of being good friends with their friends when they're over for a party. Each time I've seen them perform, they've always left an impression that won't be forgotten. I got a chance to talk with members as their outdoor 'season' was winding down, and get some of their perspectives on what they do.

The four members of 3rd Degree Burn are Aaron, Kaalin, Ravenfire and Scary Carrie. They each have their own unique style in performance, and all work hard to improve their technical skill with the tools of their trade and the artistry of their performance. Each of them are highly safety minded, and they always have someone watching with a blanket to douse any uncontrolled flames while others are performing. I'm really looking forward to seeing what they're able to accomplish with their already evident talents. 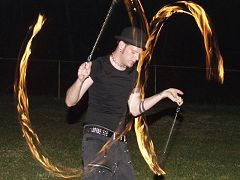 According to their web site, Aaron is one of the originating members of 3rd Degree Burn. He started off his creative outlet in the music world with live performance, production and recording, but discovered fire performance in 2001. He's also the primary developer of the group's web site. Aaron is one of the members that have started experimenting with fire breathing, stilt walking and other performance arts related to fire. Tall and decked out in black, Aaron cuts an impressive physical presence even before the flames start flying.  When I wasn't exclusively watching the group perform, I spent most of my time assaulting Aaron with questions about the basics of what they do and have done. Kaalin seems to have focused at this point as the group's main fire breather. Kaalin is also impressive, and audiences seem greatly drawn to the incredibly flashy fire art that he practices. He began his learning process 8 years ago, and explains how observant they and other fire artists are when they're watching the competition perform, so that they can learn from each other. Wearing combat gear and a top hat, spewing yards-long jets of flame, he's hard to miss.

I didn't get a chance to talk with Ravenfire, so he'll have to remain an enigma for me beyond what his bio says on their web site. He was the typical kid setting fire to gas poured in driveway cracks, which of course led him to dancing with fire. From seeing him spin fire, I get the feeling that Ravenfire approaches fire performance from more of a dance angle than some.

Scary Carrie may be known by many regional readers by word of mouth from the other line of business that she works with as a creative endeavor. She's been tattooing professionally for nine years (click here to check out her portfolio), and playing with fire for three. Since Carrie is creatively inspired in multiple areas, I directed extra questions about herself personally. In addition to her tattooing, Carrie will oil paint on any promising surface she can get her hands on. She also creates many of the tools that she uses in performance, and even built her own ant farm because none of them that you could buy were big enough for her! Some of her other creations (like a skirt made from tractor inner tubes) sound like they would be great for public display, and I hope that happens soon. 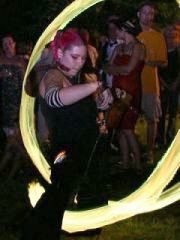 3rd Degree Burn spends the winter months on hiatus from performance because snow and ice are not conducive to safe use of fire, and outdoor venues in the cold are harder to come by. It's about equally difficult to find an indoor venue anytime big enough to allow performers to use open flame. Their down time is spent using unlit poi, and high tech LED lit glow stick equivalents to practice. Kaalin tells me that waiting for the spring thaw is like when you know you have presents waiting for you to open on a certain date. They're just sitting there waiting for you to get out and have fun with.

All of the members of 3rd Degree Burn have been great to talk with and have great stories to share. It's been interesting to talk with them about their plans and the places that they'd like to be performing. They'd like to travel with the Jim Rose Circus, and I could easily see them literally and figuratively warming up an audience for San Francisco's Survival Research Labs, or German industrial pioneers Einsturzende Neubauten. They all want to reach new technical and artistic heights and have justifiable pride in their skills and accomplishments. They are regular performers outside Kansas City's nationally famous haunted houses, and in mid-October, 3rd Degree Burn performed at Union Station for the Priests of Pallas Ball. One can only hope that the significant impressions that they left in their wake there leads to even bigger and better things.

When I asked them if there was anyone else that they felt performed at their level nationally, they gave their opinion that aside from a few other people locally that they've worked with in the past, no other group closely compares. I think that with that kind of confidence, with or without other creative collaborators, they're poised to succeed in sharing their talents with even bigger audiences. I hope that everyone reading this gets a chance to witness this very memorable experience of 3rd Degree Burn.
For more information check out their web site, 3rdDegreeBurn.net.
zine.v1.stories