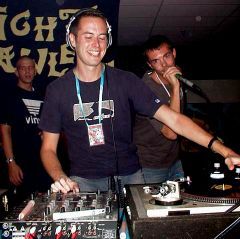 No, this isn't a DJ potluck, but Flatline and ADB production's latest event, Gobble Gobble took place on Nov. 25th at the Mile-Away-Hall-Deuces Bar in Crescent, Iowa (just outside of Omaha), this post-Thanksgiving event dished up everything but the leftovers.

ADB took the time to interview his long-time colleague, Spree.


Spree, I firstly want to thank you for taking the time to sit down and chat about yourself and your life as a word renowned Hardcore DJ. After 8 years of DJ’ing you are still here, and there is still a major demand for DJ Spree, how does that make you feel?

Pretty surprised actually, I never thought I’d be still doing this eight years later, when I first started. I’m pretty happy about it though.

What initially inspired you to take up the art of DJ’ing?

When I was 20 years old I stumbled onto a Bonkers compilation that had a mix by DJ Hixxy. I didn't know anything about electronic music and hadn't even attended to my first rave yet. I remember thinking that the music was just pure raw energy unlike anything I'd heard before. It floored me. I wanted to experiences that level of energy from music first hand. Unfortunately there weren't really any Hardcore DJ's in my area back then, so if I wanted to hear it, it was up to me to play it

What styles of dance music have you played, and why did hardcore appeal so much to you?

In addition to hardcore, I play jazzy D&B under a different name as it reflects my musical tastes outside of the ‘scene.’ As for the appeal of hardcore, I’m drawn to it’s raw positive energy, it’s unlike anything else I’ve heard.

After experiencing the many highs and lows of being a rave DJ, how do you feel about the fact you have had to face so much adversity because of the style music you play?

Challenges that you can walk away from, build character. I’ve gotten to see a lot of places I otherwise wouldn’t have been able to had I not been a DJ. I’ve also seen both the very positive, and very dark sides of human nature. I’ve learned a lot in my travels and I feel blessed that I was able to have such an opportunity.

After the success of ‘Never Ending Hardcore’, you must feel proud to have created a track that has given many happy memories to so many ravers across America.

For sure, but I didn’t create it by myself. My friend Jason H. did much of the technical aspects, and we really co-produced it.

Do you formulate your sets before you perform, or do you bring a mixed bag of treats in your records bag and just play-off the crowd’s reaction?

A little bit of both: I usually plan the first 3-4 records or so, just to give me time to get used to whatever sound system I’m playing on. After that, it’s a mixed bag based on the crowd’s reaction.

What does it mean to you to be performing again in Omaha after igniting your career initially at ‘Plur 99’ (which is widely considered one of Omaha’s best parties)? What’s your best memory of that evening?
I’m always happy to play in Omaha; it’s a great town with lots of positive people. My favorite memory of that evening was the giant beach ball…

Every experienced DJ has been placed in strange and often-hilarious situations, please tell us the story about the bum in Detroit and your unfortunate earplugs.

Ha! Well, in 1997 there were not really any UK Hardcore style parties going on in the states. Up in Toronto, however, there was going to be an all UK Hardcore party with several DJs from across the pond. I decided to make the road trip out there with two female friends of mine. We stopped on Friday night in Detroit to see a show, and then made out way through downtown afterwards around four a.m. We drove by The Fox Theater, which had a gorgeous marquee, and the ladies wanted to take a photo. I pulled up next to the theater, and the ladies hopped out. Immediately a guy wearing a purple satin jump suit, looking to be about 50 years old, came over to the ladies and started talking to them, then he walked over to the unlocked passenger door, opened it and stepped inside. I was more then shocked, but played along since I had no idea what his motives were. He asked me if I had any spare change, and being that I have a hard time controlling my sarcasm, I said, “nope, all I have is this used earplug, you want it?” Unfortunately, he must not have comprehended what I said, because he nodded his head, so I handed him the earplug I wore at the show an hour earlier. He examined it for a moment, squeezing it in his fingers, and then said “oooh, a marshmallow!” and popped it in his mouth before I could protest. He instantly looked over at me, and scowled, spitting it out. He must have been a bit dazed, because while he glared at me, he quickly got out of the car, and walked away. The ladies jumped back in, and we sped off. It was an extremely surreal moment.
zine.v1.stories