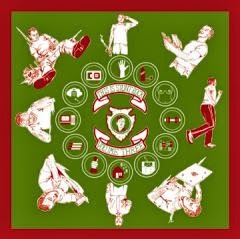 If you dig deep enough in some underground videotape trading circles you can find a tape from back in 1999 of William Flegal aka Stunt Rock performing in a band called "Meat." He can be seen slashing himself with razor blades, urinating in cups and drinking them, smashing computer monitors on his head, all while a band plays mediocre Black Sabbath covers and Dan Doormouse shoves meat up his bum. Perhaps the tape was just a product of Midwest boredom and youthful ambition, but whatever the case, let us introduce you to the confusing and zany world of Stunt Rock, the most legendary, reclusive, and talked about artist to rise from the ashes of the Midwest-USA Breakcore scene.

Stunt Rock built his career on countless spray-painted CDR's given away at shows in a drunken stupor. A total disregard for sequencing and obsession with samples gave way to a reputation as the new "punk rock" of the electronic scene in the Midwest.