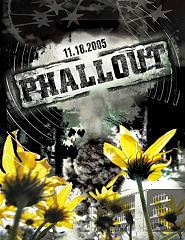 story & photos by todd ~ graphic art by Chrissy Laing ~ This is a fictional account, based on the facts of the disaster at the Chernobyl Nuclear Power Facility. The names have been changed to protect the innocent. :P

USSR - Officials stated in a report today, that at roughly midnight, in preparation for testing, power levels on a reactor at one of their Nuclear Power Facilities had been decreased to 720 MW(t) and continued to be reduced to 500 MW(t) over 30 minutes. Control was transferred from the local regulating system to the automatic regulating system, but either the operator failed to give the signal to hold power at required levels or the regulating system failed to respond to this signal, leading to an unexpectedly rapid decrease in power to 30 MW(t).

Spokesman for the plant indicated that in response, the operator retracted a number of control rods in an attempt to restore the power level. Within 30 minutes, the reactor power had risen to 200 MW(t) and, as part of the preparations for testing, an additional pump was switched into the left hand cooling circuit in order to increase the water flow to the core. Shortly after that, an additional pump was switched into the right hand cooling circuit. This was also part of the testing procedure and operation of additional pumps removed heat from the core more quickly, reducing the water level in the steam separator.

At approximately 1:15 am, automatic trip systems to the steam separator were deactivated by the operator to permit continued operation of the reactor and feed water flow was increased in an attempt to address the problems in the cooling system. Some manual control rods were withdrawn to increase power and raise the temperature and pressure in the steam separator. Operating policy required that a minimum effective equivalent of 15 manual control rods be inserted in the reactor at all times.

At this point it is thought that that the number of manual rods was reduced to eight. Automatic control rods were in place however, thereby increasing the total number. Feed water flow rate was reduced below normal by the operator to stabilize steam separator water level, decreasing heat removal from the core. Spontaneous generation of steam in the core began. The reactor seemed stable at this point and all stations were on standby for testing.

The indications received by the reactor operator, although abnormal, gave the appearance that the reactor was stable and at 1:23 am, testing commenced. Initially, turbine feed valves were closed to start turbine coasting and automatic control rods were withdrawn from the core. 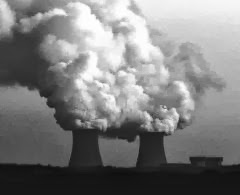 Officials stated that this was the normal response to compensate for a decrease in the reactivity following the closing of the turbine feed valves. Usually this decrease is caused by an increase in pressure in the cooling system and a consequent decrease in the quantity of steam in the core.

Spokesmen indicated that the expected decrease in steam quantity did not occur due to reduced feed water to the core. Steam generation had increased to a point where, owing to the reactor's positive void coefficient, a further increase of steam generation led to a rapid increase in power.

Thirty seconds into the test, the steam in the core began to increase uncontrollably and the emergency button (AZ-5) was pressed by the operator. Control rods started to enter the core. The insertion of the rods from the top concentrated all of the reactivity in the bottom of the core. The reactor power rose to a peak of about 100 times the design value, fuel pellets started to shatter, reacting with the cooling water to produce a pulse of high pressure in the fuel channels, in turn rupturing them.

Thirty seconds later, and one minute after the test had been started, two explosions occurred. One was a steam explosion; the other resulted from the expansion of fuel vapor. The explosions lifted the pile cap, allowing the entry of air. The air reacted with the graphite moderator blocks to form carbon monoxide. This flammable gas ignited and a reactor fire resulted.

Officials are not commenting futher at this point, but experts from the scientific community tell us that it is likely that some 80 of the 140 tons of fuel, which contained plutonium and other highly radioactive materials (fission products), were ejected from the reactor along with a portion of the graphite moderator, which was also radioactive. These materials were scattered around the site. In addition, Caesium and Iodine vapors were released both by the explosion and during the subsequent fire.

In addition, they say that this deadly mixture of fission products and vapors have also been ejected into the upper atmosphere. They believe that prevailing winds will scatter it around the globe over the next several weeks in a sort of band of radioactive storm that will leave only desolation in it's wake.

Though minimal damage is expected in our area, this cloud of phallout will definitely drift through on the night of November 18, 2005. Officials are urging everyone to take shelter from the hours of 9 pm until 5 am.

Unfortunatley, in anticipation of mass panic, officials have refused to release the location of the shelter until a day or two prior and are advising everyone to begin preparations immediately.

Tune to Message Forum Thread T1943 on this site for immediate Shelter information, as soon as it is available. Directions will be provided from your location. In addition, information will also be provided in the calendar section to help facilitate a broader range of information distribution.

Tell Everyone You Know!

It is Not All Bad News Though...

Officials have informed us that shelter perparations are well underway and the facility to be used will be clean and comfortable, containing multiple amenities to pass the time. phocas Staff will be on hand to assist you with any questions or concerns you may have, as well as Security and EMTs to assist those needing it. There will be video feeds to keep you informed on what's going on outside of the shelter, a coloring area for the kidZ and appropriate facilities for decontamination.

In addition, the following performers will be on hand to provide you with some of the best in electronic music available so that you may dance your cares away all night long. In no particular order, they are:

More than a year ago, this man rocked your world in a fantastic tag team match with Shiva and since then he has taken the global techno scene by the throat with continuous output on the most respected labels worldwide. His releases on the renowned Primate and Primevil labels are caned on a regular basis by such techno heavyweights as Carl Cox and Adam Beyer. Known amongst the global touring circuit as one of the essential live PA acts to hear. In addition to running his own redcording label, Chromagnon Recordsing, his touring schedule has him everywhere from Australia to Brazil to Germany, Belgium, and Austria. You do not want to miss this rare opportunity to experience one of today's essential building blocks in the world Techno! Check out the interview that we did with him in this month's issue or visit his web site at DJAdamJay.com

An intricate part of the Iowa electronica scene since 1999, the past couple of years she has become well-rounded, finding a niche within electro, breakbeats, German and Detroit influenced techno, experimental and even underground hiphop. As a performer, her energetic stage presence, mixing ability and choice in tracks has made her an up and coming DJ that knows how to keep a dance floor satisfied. She has played on the roster with several well known artists such as Tommie Sunshine, Terrence Parker, Woody McBride, Boo Williams, Nick Santillian, The Faint and Donald Glaude, amongst others all over the MidWest! We sat and had a talk with her this month too and more information can be found at her production company's web site, MinaCapa.com!

Staying busy with his own production, TShirt business and gigs with BreakBotix, it seems likes it has been forever since we have heard this man play out on his own. Making a very special appearance for us on this, he will serve you a plate of BreakBeats that are sure to leave you twisted upside down in the middle of the floor. bBoys! Let's see what you got! In the meantime, if you want to read up on him a little, he had a few words to say a while back in an interview with Breakbotix!

Well known as one of the best of KC's DnB scene, as well as your host every Wednesday night at The Cup & Saucer, cQuence is gonna get the groove rollin with her unique sound. Add a little Alaskan vocals and this should be a very special birthday set, produced live by the birthday girlz themselves! A while back, we interviewed cQuence for our August 2004 Issue.

The opening and closing of the shelter will be hosted by:

These two members of The Heavy Lounge will be sharing the stage to bring you an interesting collection of broken beats that will put you in just the right kind of mood to get your party on.

Recently relocated to KC from Lincoln, NE where he played various events. This runner-up in the phocas DJ Battle House Week will be bringing his hard & funky house out to get your body groovin.

Known in Kansas City as the man that loves nothing more than Techno and his video displays, vjOnes will be producing a very special service of Retinal Destruction this night. Check his web site to see what he may be up to.

Remember phlashback? Remember that crystal clear bone crushing sound? We've got the same system. Actually, a little bigger this time.They've grown a little in the last year and recently did the lights for the Dance Tent at Wakarua! As a result, they will be providng sound and a light show for this event. You know these guys know how to do it right. Check 'em out on the web at AudioHouseSound.com!

phallout shelter Provided By: Knights of Pythias of Independence