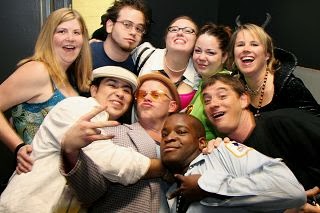 Shaun got one last snapshot of me and Robin (& everyone else) before runnin off to St Louis. I'll miss ya, but I'm sure that our paths will cross again. They have parties there too. :)


The cover this month is different than any other month prior, in that instead of being a photo, it's a portion of the artwork by Chrissy Laing for the phallout flyer. I liked it so much, I figured what the heck, but the story is one that's been developing for months. As well, there is more interesting art being created for the event itself. Be sure to check back a day or two before the 18th to find out the location of the shelter.

This has been an interesting month to say the least. Kicking it off was the Pajama Gala at Kabal Restaurant & Nightclub, followed a week later by visit from one of the masters, Carl Cox. The same night, Frankie Bones & Josh "The Funky 1" were throwin down in Lawrence.

We put together an event with Reveal Magazine & u:Move at Kabal Restaurant & Nightclub, called Paparazzi that brought out all kinds of interesting people. While all of that was going on, Senseone was getting his party on in Philladelphia at Whistle before bouncing out here to play at Resistance.

Lee Burridge came to town, as well as another visit from Chicago-based Surreal, while Senseone gave us another view of Carl Cox, from Philly.

The end of the month went completely off the chain though, in one night we were 5 different places. In Springfield, SvS played the Faces of Halloween party and brought us back a few pix, and Joe ran away to Lawrence for the Nightmare on Mass St.

I kicked my Halloween weekend night off at The Bacchus Foundation's Terror at the Train Station 3, while Shaun dropped in on Martini Corner's Halloween on the Hill. After that we both landed at Kabal and spent the rest of the night with DJ P, now holding down residencies in Las Vegas. It's good to see that he's really start to get the recognition he deserves.

Meanwhile, Bad Boy Bill was showing off his skill at the newest addition to the club line up, Harrah's Casino. This particular night there was some confusion regarding cameras and we couldn't get any footage of this place. I'm not quite sure what they are calling it yet, but we'll be talking to them real soon to get the low down before you go down. I've heard that it's quite a fabulous room.

Ending the month though, was a great little party at the Newsroom. It seemed the perfect way to end Halloween night, in a warm little room with great music.

Speaking of warm little rooms with great music, True Tuesdays is goin just as chill as always. We have built up a great little Electronic Music Lounge, stayin True to what we wanna do, so if you get a chance, stop in...  otherwise... see Ya at The PHALLOUT Shelter!