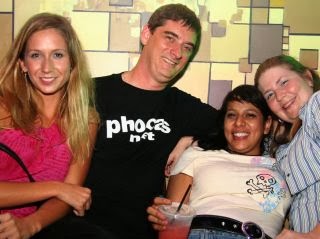 And piled on a couch in this corner, is me and three of my favorite girls in a photo taken at Kabal Restaurant & Nightclub during their 3rd Annual Luau just a few weeks ago. It was great time and the place was packed, with a line out the door. That is something that is becoming a pretty frequent occurrence lately and early arrival is becoming essential to not having to wait outside.

Speaking of the world outside, my home away from home, New Orleans, became a disaster area. It was saddening and disheartening to watch as the city that plays host to one of the greatest parties of the year, Mardi Gras, slowly became submerged in flood waters. It seems that all of us knew someone who was affected and wanted to help somehow. If you're still interested in helping out, check out the ad at the top right of this page, called "Dance Community Cares". It will take you to a web site set up specifically to help coordinate the effort to raise funds through dance music events for the victims of Hurricane Katrina.

Another banner month for photographs, though most have been in Kansas City, as I need to stick around from week to week to run the phocas DJ Battle, told in this month's lead top story by Chris Milbourn. The photo of the cover was taken during the Breaks week of the competition, a fine week indeed. The whole 5 weeks was awesome, with a great set of talent each and every week.

The month in photos did start off with a cool little event thrown by Four Corners, called Another Late night and ended with an appearance by Paul Anthony at Jilly's on Broadway, brought to you by a new production groups in Kansas City, looking to bring a host of talent through there every Wednesday, though I think my mainstay is gonna be The Wednesday Perk at The Cup & Saucer. That place just has the perfect little vibe. Joe even tried his hand at playing out there one night a few weeks ago and received quite a reception, even being asked to come back and do it again.

The photos this month come from all over the place again. There's a really fantastic gallery contributed by Kent Frost of Springfield and SenseOne in Philly sent some stuff from the east coast.
October's looking good too. Despite the fact that two really great shows that were being planned for Kansas City Halloween, were cancelled, there's an easy alternative in Lawrence (Nightmare on Mass St), as well as the third installment of Terror at the Train Station, put on by The Bacchus Foundation. Be sure to check it out.

Long before that happens though, we're getting read to do a few events here and there. The first of which, called The Paparrazi Party, will be October 8th at Kabal Restaurant & Nightclub. We are rolling out the red carpet for you and anticipate a night of celebrity and paparazzi madness. Security will be tight for you, the best dressed and sexiest superstars of Kansas City. After passing through doors, we will welcome you to Your private party, where we'll give you the million dollar treatment. You know how we do and the cameras of phocas.net will be flashing everywhere at this party!

And looking forward, we are going to have a flyer circulating soon. That's right, we're doing it again kidz and it will be every bit as good the last time, if not... better. We have definitely got a few tricks and treats stuffed up our sleeve for next month!