battle on the beach

by Chris Milbourn ~ photos by todd ~  Kansas City, MO - Beginning on the 25th of August and running every Sunday night from August 28th through September 25th, local DJ’s (some unknown and others accomplished) gathered for the sake of friendly competition taking form in a DJ battle sponsored by phocas.net and hosted by Rehab Sundays at the Westport Beach Club in Kansas City’s celebrated Westport district.

Three-dollar pitchers, sand volleyball, dancing and good music made for a great atmosphere after a Chief’s game. House, Breaks, Drum & Bass and “Mix & Match” competitions were held every week, culminating in the victorious jockeys from each battle going all-out in a fifth week of “Finals”. DJ’s were graded on a scale of 1-5 by selected judges in categories such as technical, beat-matching, programming and presence. 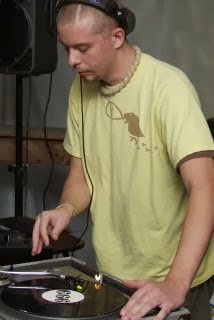 This first night began just before the Finals of the Miss Hawaiian Tropic Bikini contest. Mr. Nuro, Psyclone, Bucho and DJ Fool squared off on Technic’s, Pioneer CD decks, and a focal mixer. DJ Fool delivered one of the better mixes of the night, despite few vocally-driven records. Bucho kicked things in to gear with the help of some James Brown and later described “gauging” the crowd and believed his effort was very “solid”. Kansas City resident and experienced house DJ, Psyclone offered his own style that’s been heard at “almost every venue in KC at least once.”

Watching from the sidelines, Amanda, his usual partner in the tag-team DJ duo known as Jack and Jill, watched as Mr. Nuro blew the competition away in a landslide victory, while lacing Eminem and Dr. Dre’s “Forgot About Dre” into his house program. Mr. Nuro’s presence behind the decks was confident and enthusiastic. Winning the night, he will be playing an opening spot at Propaganda at Jilly’s on Broadway in the very near future.

The next weekend, Nuro would find out who his first foe in the finals would be, as he seemed to be in hawk-mode at the bar every Sunday night after his own victory. 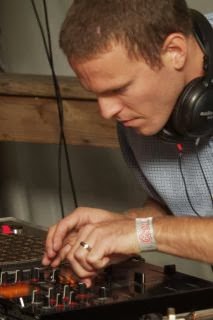 Just John was first up for the breaks night the following week on September 4th, where a Labor Day weekend crowd treated the dance floor accordingly. He cut a lot in his mix among Audio Bully’s, Ming + FS and DJ Abstract records. John is currently working on landing a gig with a radio show in Manhattan, KS, and expressed thanks to phocas.net for the exposure offered by the battle.

JD Staley ensued on the decks, playing “Auburn” by Skylab 2000 among other songs. He plays out “occasionally,” (on a number of instances spinning in excess of four hours) and opened up for superstar DJ George Acosta at the Uptown Theater earlier this summer.

Andrew Schwindt (aka DJ Schwinn) noted that some favorite tracks in his battle mix came from the Dust Brothers and Elektrobank. He remarked that the “Brothers Gonna Work It Out” mix by the Chemical Brothers was highly influential in his practices as a DJ. He said his mix “wasn’t perfect,” and added that there are a lot of variables involved in battling.

Hailing from Wichita, KS, David McGlothlin continued the trend set by Nuro, and won the breaks night in a total rout. He busted out some homemade remixes and “mashed up” a Soulstice record with “Higher State of Consciousness” by Josh Wink. When asked what he thought about his successful mix, he humbly suggested that he benefited from going on last. David ended our discussion with “My most consistent residency is my basement.” As the winner of breaks night, David McGlothlin gets fixed up for a performance at Essential Saturdays at the Grand Emporium, and a meeting with three other DJ‘s in the finals. 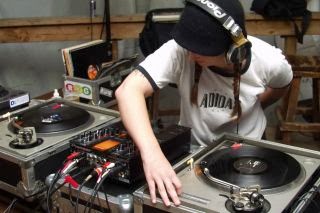 The drum and bass/jungle (9-11) didn’t draw as many people as the previous two nights, but was still a lot of fun and there was even a bar-b-que prefacing the party.

The first DJ, and original member of the Goodyear Crew, Ray Pena did well considering it was his “first time spinning jungle outside.” He played all vinyl, which was a common sentiment among the DJ’s on that particular night. Pena commented on the “marriage” between MC’s and DJ’s and supplied that idea on the decks, playing Tech N9ne’s “It’s Alive” at one point. The judges didn’t think much of his mix, unfortunately.
Having played the chello and bass guitar in the past, Policy brought experience from DJing the wildest (and most infamous) parties at the Red Barn, years ago when I was still roaming the halls of my middle school. Exile and Vector Burn were among the drum and bass producers who got play in his battle mix. He’s currently working on a full length album of tech-house.

DJ Aldrin followed in suit, playing “mostly vinyl.” Fitting the evening, he finished his mix with a September 11th tribute. His favorite party that he ever attended was “Where The Wild Things Are,” back in 2000. “That was a massive party,” he said and his favorite party to have played to date was MidWest FreakFest, in Souther Illinois earlier this summer. As for his battle score, the judges appeared impressed with his programming and selection.

Pulling a high score of 86.5 for the evening, DJ Skizm worked the “up’s and down’s” in her mix, which I personally told her I believed to be a trademark of jungle. Her mix was all vinyl of course, to which she added, “I won’t even play my own music on CD,” and “I’m a turntablist!” As an old-schooler, she started listening to dnb and jungle way back in 1992.

If parties in Kansas City were to ever build off the golden era, she said “Communication between old-schoolers and nu-schoolers needs to be better.” She also gave advice to old and new partiers. “If you’re having a bad time, look within.” She was ultimately rewarded for her performance at the Beach Club with an opportunity to headline The Wednesday Perk at The Cup & Saucer. 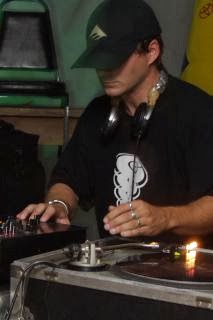 So far, it was Nuro, David McGlothlin and Skizm scheduled for the finals. One more slot was left to be determined.

The “mix and match” night was held the following week, where four new DJ’s competed with their own unique styles, not necessarily sticking to any one genre.

Eclypz broke in the crowd with a real mix of what sounded like everything rolled into one, including a lot of scratching. He played some Leftfield and DJ Icey to compile one of my favorite mixes of the whole competition. He thought he did very well, despite adjusting to new equipment and playing all vinyl. He scored an 82 according to the judges.

Tony Markham (Skizm‘s husband, actually) expressed subtle frustration in missing a cue point here and there, but said he was pretty much “happy with everything.” Barbara Tucker and DJ Duke were on his “syllabus“ if you will. Drunken hoola-hooping spread like a virus throughout the dance floor.

Jon Nuskool opened with a dramatic track from a DJ Shadow side-project known as UNKLE. Jon’s “happy trance-core” style is quite eccentric, because he plays trance records at 45 speed. What comes out of that is music at a ridiculously fast pace, but he’s keen on matching the separate beats, which the judges took note of. “Not yet 30,” Jon’s been playing vinyl in some form or another since he was 15 years old. He likes playing warehouse parties and particularly enjoyed the old days at 10th and Union. He and his friends long to bring the “music” and “mystique” back to KC. He also gave big up’s to his homeboys at Deep Fix, phukbed and phocas.

The 20 year-old Andrew Northern (aka DJ Stranger) was captivated by spinning records because he related a DJ mix to a “mosaic.” He’s trained in piano and voice, and enjoyed playing at the Playboy Party in Lawrence a while back. At the moment, he is producing “lots of house tracks” and does “what he loves.”
After “mix and match” night was done, it was Tony Markham that had scored highest with an 85, just one and a half point less than his wife (Skizm) garnered the weekend before in her separate battle. But his score was still high enough to secure the win, a night at True Tuesdays at Balanca's and a ticket to the next week's events. 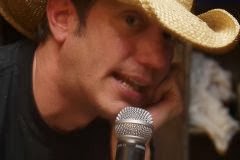 When I first arrived to the Beach Club on finals night, I said “what’s up” to DJ Skizm, and she told me that her and Tony had been practicing on their turntables “all day“, taking turns clowning on each others mixes. Right then I had my bet on one of two.

Nuro went first, and kicked his usual funky, high-octane house stuff. David McGlothlin proceeded by wowing the judges with his beat matching. Up next, Skism, and at one point she had me thinking she may be one of the best DJ’s in the city, until her husband took the decks.

An hour later, our comedic MC, John Q. Pubic from 102.7 KISS FM announced that “Tony Markham!” had won the finals with a score of 80 points. A 2-hour photo-shoot and an opening performance for a major headliner at u:Move Saturdays at Kabal Restaurant and Night Club are his.

To be frank, opening up for a national or global superstar might phase someone else, but I doubt it would shake Tony’s nerves whatsoever. Afterall, he’s shared the stage with the likes of Frankie Bones, Trevor Lamont, Dave Angel, Derrick May, Halo, and AK1200 already. Perhaps Kansas City will soon have it’s own world-renowned house DJ. Congratulations to all the DJ’s and especially to Tony Markham.

Through all of this, resident DJs billpile and Steve Thorell listened and expressed that they were fairly impressed with the talent that had been brought through. This definitely gave them, as well as a number of other promoters and club owners and great opportunity to see and hear some of the new talent on the rise.