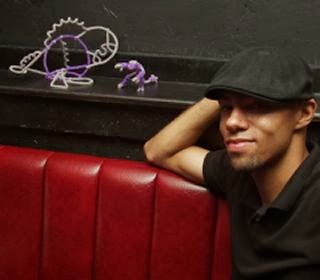 by David Goth ~ photos by todd ~ Kansas City, MO - Jason Guffey is an artist friend of mine, that I think is doing something that's really cool, so when I got the chance to interview him for phocas.net, I jumped at it.

Guff's sculptures are a variety of different figures, some simple, but with an incredible amount of character, each one seeming to have it's own personality simply from the whims of the designer. Others include fully articulated figures that when you look at them, and see the detail, start to question if they really are only made with pipe cleaners. Yeah, pipe cleaners! It's a beautiful thing to see Guffey pull those figures out and people just start throwing out the questions... "Yes, they're made with nothing but pipe cleaners" is the answer to the usual first question. I once had an interest in making some figures for stop motion animation and I know how important and difficult it is to have joints with that kind of articulation. But Guffey put it together for himself a way that he could do it with pipe cleaners in his sculptures. I asked Guff about some of his earliest pieces that he had given away over the years, and he said that some of his first figures were teenage mutant ninja turtles. I wish I could have seen that because I was a fan too.

His influences have been the usual stuff like comic books, but also hip hop and electronic music cultures, and a strong personal connection with the Star Wars universe. I've had a number of conversations about his philosophical framework, and he'll give a reasoned discussion about how he's guided by outlooks described in the Star Wars series of movies. But look at Guff, and you just don't think about the great unwashed dark side of geekdom, giving the rest of us good geeks a bad name. Buy Guff a Newcastle and strike up a conversation about this. Take it with an open mind and you might find yourself feeling a bit more enlightened than when you started. 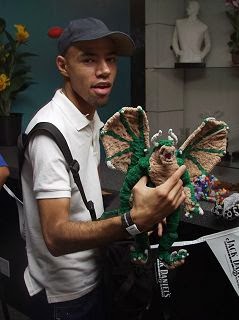 I think most people that have met Jason will remember the first time he pulled out the Dragon. This bad green dragon, made completely with pipe cleaners, has got about an 18 inch wingspan, as well as fangs and talons. And with the way it's joints are put together, it even moves in lifelike ways, much like you might see in a different way through computerized animation in a mainstream fantasy flick. This green beauty leaves an impression with you. I wish some more patient and dedicated person than me would collaborate with Guffey to get this stuff animated like the claymation of christmas specials and Tim Burton demented visions. But as cool as the Dragon is, all of Guff's other stuff just has so much personality I'm really looking forward to seeing the pictures that will go with this article.

One of his other sculptures has seen some wear, and is really his testing ground for a lot of his ideas, so he hasn't concentrated on making a repair that really only detracts from it a little. This is a large pipe cleaner figure with dreadlocks. His latest large piece is a figure of himself that blows you away. This was still a work in progress the last time I saw it. But when he's showing all these sculptures that obviously have taken a lot of time, and then he busts out the Woogles.

The Woogles are special because they're not of this earth, and complete spawns from Guffey's laboratory of a brain. Crafting from the compiled experiences of his lifetime, these bad little guys, made very simply from just a few pipe cleaners impress. They're these lizard looking creatures with prehensile tails that you can't decide if they're hyper-cute and you'd expect to be hanging from the sweetest tokyo kogal's keitai, or if you'd see some matrix-ed out martial arts move flying upside your head. Evoking the peace and wisdom of Yoda, while channeling the ninja turtles (and my guess, maybe a hissing Sleestack from Land of the Lost), Woogles are instant gratification at first glance. Jason wove me a tale of a culture and three different genders (instead of species) that make me think of different classes of individuals of a race of weird creatures. I've been anxiously awaiting the physical manifestations of the rest of this vision.

Even the little Woogles have been evolving in the short time I've known Jason, because now he makes "lairs" for his Woogle sculptures. These are little homes for the lizardy men, and are great places for them to demonstrate the action poses he bends their forms into. He signs every one in pipe cleaner (just like on the bottom of the shoe of his pipe cleaner sculpture of himself), and they make me remember days of hanging around on a jungle gym as a kid and want to do a lot more of that. 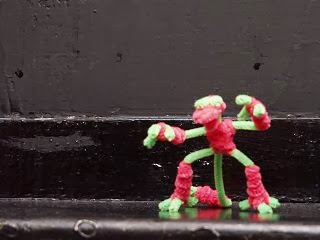 Jason's got a lot of ideas about where he'd like to lead his art, from collaborating for this awesome multi-perspectived animated world, to wall pieces and entire forests, with major grafitti influences hidden within, and I'm just waiting for them to see the light of day. Right now Jason has to work a regular job just like everyone else, so he does what he can. Guffey's an easy one to become friends with, and while I've become one of those people and might be accused of a bias, I really think Jason Guffey's work is worthy of some attention, so I hope I've done my part to entice you take a look and decide what you think about it yourself.