the politics of dancing 2 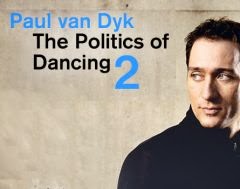 by Betty Kang, PlexiPR ~ Politics – nothing to do with dance music? Paul van Dyk’s first installment of Politics Of Dancing established his belief that dancing is a political act and dance music can very well be political. He should know. As someone who enjoyed little freedom in his native East Berlin before escaping over the wall to the West, he understood all too well that radios and dance music are windows to freedom for many young people in repressive societies. His own experience has led him to use the global youth culture platform provided by dance music to voice his political opinions, such as his vocal opposition to the war in Iraq, to encourage active participation in democracy, such as his Rock the Vote Tour in 2004, and to help fight poverty by supporting social care networks for the disadvantaged from India’s Mumbai province (Akanksha) to New York (Ground Hero Kids) to his native Berlin in partnership with the German Red Cross (Rueckenwind). And in contrast to the popular image of the ‘global superstar DJ’, much of van Dyk's political work goes on behind the scenes as in his private conferences with leaders of the main German political parties.

Politics of Dancing 2 contains van Dyk’s new original single “The Other Side;" van Dyk wrote the song in response to the devastating Tsunami which hit Southeast Asia in December of last year and killed over 150,000 people. Van Dyk felt it was important to recognize that so many people were instantly affected by death and the loss of loved ones. "The Other Side" expresses the feeling of still being with a person who has passed away in one's thoughts and expresses the hope of seeing that person again on "The Other Side." The single will also include remixes by Deep Dish, Mark Spoon and Martin Roth.

Politics of Dancing 2 is arguably van Dyk's best compilation yet, and shows how far he has embraced new digital technology. The majority of the tracks on Politics Of Dancing 2 have been reworked, remixed, rearranged or edited by van Dyk to form this unique compilation. The melodic, slower rhythms of CD 1 include tracks by Jose Zamora, Shiloh, Whiteroom, and Mr. Sam, while the tougher beats of CD2, feature tracks and remixes from the likes of Jose Amnesia, Angello & Ingrosso, Marco V, and James Holden. The end result is a stellar mix by one of dance music’s most exceptional figures.

Last year, van Dyk made history by nabbing one of the first Grammy nominations in the new category for Best Electronic/Dance Album for his artist album, Reflections, which includes "Time of Our Lives" as featured in HBO promos, in The Sisterhood Of The Traveling Pants and in the current Landrover TV ads and "Connected" as featured in Motorola's global TV ad campaign. He has been hailed by BPM Magazine as “America’s Favorite DJ,” “Best Music Maker” by DJ Magazine, has won 3 Dancestar and 3 IDMA Awards in the past two years and won the Ariel Award (Mexico’s version of the Oscar) for his soundtrack to the film Zurdo. His partnership with “Rock the Vote” to encourage America’s youth to exercise their right to vote in the 2004 presidential elections marked the first time an electronic artist became involved in the campaign with a national tour and he joined other artists such as Bono, Mary J. Blige, Lenny Kravitz and the Black Eyed Peas in the effort.