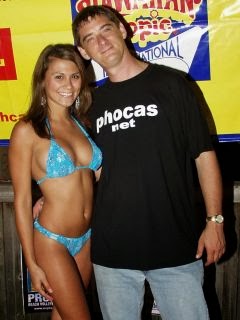 It always seems like I just got back from some place when I sit down and finally write this. Tonight, it was The Grand Emporium, for the Steve and Bill show. Those guys are definitely doin what it takes to keep House alive in this town and "spread the word". Everywhere they play it always seems to be a more and more diverse crowd.


Rehab Sundays are probably my favorite though. This past week was the finals for the Miss Hawaiian Tropic Bikini Contest. That's where this month's photo is from. I can't really remember who took the photo, but I'm pictured here, with the winner. She's definitely got the Hawaiian Tropic look and I think she should go a long way in the various stages they have with that contest. It was really good to see Reveal Magazine step up and bring this event back into focus after it nearly crashed and burned.

That Sunday night was actually the first night of the phocas Beach Club DJ Battle also. Over four weeks, every Sunday we'll have different contestants battling for spots at various clubs around town. If you get a chance, come on down and see some of the new talent in town. You'll be very surprised. DJ Fool, from Lincoln, NE really gave Mr_Nuro a run for his money this week. Brent seized the day though and will be going up against the winner's of each of the next three week's in the finals which will be September 25th. That night, the DJs will be battling over an opening spot for a major u:Move headliner at Kabal, to be announced.

We also hosted an event, in what we would like to see become a series of events, "phocas presents...". The idea is to showcase a particular up-n-coming DJ that we have found along the way that is making great strides in their own hometown and bring them to Kansas City. Trevor Matthews, from St Louis was the first. He brought us a taste of St Louis House... to a packed house. That's right, we had to close the doors again. I'm sorry to those that might have missed out.

Before that though, we kicked August off at my place with the 4th Annual BBQ Beatz session, a mixer / soiree of sorts of all of our staff, as well as various promoters, producers, musicians, friends and family. This was probably the best one yet, though every one of them has been a blast, in it's own weird sort of way. We had a few cocktails, listened to some fine tunes by The Heavy Lounge, played some volleyball for a minute and ate a buttload of food. Later in the evening, before it was all over, my good friends from 3rd Degree Burn gave us a bit of performance. Everyone loved it and I think some of the little kids that were there are still talking about it.

True Tuesdays is back in action again after we reorganized it a little bit. DJ True is still hosting the night, but we are going more for a lounge feel with the music. Mike is doing the best he can to search for and bring in talent from all over the city to play our little Lounge. Miss Michaela from Chicago even stopped in a gave us a good little dosing of House with some Old Skool classics.

OH! I almost forgot, the cover this month was a photo taken by one of our newest contributing writers, Chris Milbourn, at an event he attended this month in Cincinnati, called Scribble Jam. Check out the accompanying article in this month's issue. It sounds like he had a pretty great time.

See Ya on Dance Floor