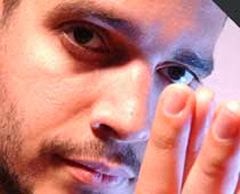 Justin Kleinfeld ~ “Over the last few years Miami has come a long way in developing as an important place for dance music and I am very proud to have been a part of that... I have always tried to be an ambassador for Miami when I tour and this CD is a reflection of the sound I take from Miami to the rest of the world.” – Oscar G, August 2005

On October 4, *69 Records will release Oscar G’s long awaited new mix compilation, Made In Miami. Look no further than the title of this CD to understand what Oscar G. is all about. He was born and bred in Miami; he is one of the architects of much talked about “Miami sound;” and he is one-half (along with partner Ralph Falcon) of Miami’s super award-winning production / remix team MURK. Oscar G. was indeed made in Miami and this CD is a window into his world.

Made In Miami is Oscar G’s most personal and introspective project to date. Unlike his previous mix CDs – which often only covered a moment in time on the dance floor – Made In Miami was a much more involved process. Oscar received tons of new music from the onset of this project and spent months handpicking the right tunes. After the tracks were selected, Oscar put on his production gloves and made edits, added loops and sampled vocals on to nearly every track. The result is a CD full of tracks he personally enjoys listening to and not one made strictly for the dance floor. “When I selected the tracks for this CD I was trying to pick tracks that represented where I am now as a DJ, but more importantly tracks that I thought would stand the test of time. I was less concerned with having up-front tunes than I was about having GOOD tunes. There is a combination of brand new un-released tracks, tracks that have been big for me on the dance floor as well as a few classics. This is a true representation of how I put my sets together and what I like to hear,” Oscar G. says.

Made In Miami features a dynamic pairing of tracks from dance music’s biggest names (The Basement Jaxx, Steve Lawler), its hottest young producers (Sammy Peralta & DJ Rooster, Carl Kennedy) and of course a few of Oscar G. and Ralph Falcon’s own classics. Specifically, be sure to check out Lawler’s blinding mix of Funky Green Dogs “Reach For Me” and Murk’s “Miami Heat” mix of Lee Coombs’ “Shiver.” Oscar G’s own personal favorite part of the mix is the disc-one mash up he did featuring DJ Pezi, Basement Jaxx and Ralphie Rosario. “Last Summer, I hung out for a few days in Ibiza after a date I played at Pacha. I went to a Circo Loco party at DC-10 with some friends and Clive Henry was playing. In the middle of his set he dropped Basement Jaxx "Fly Life" and it sounded SO relevant that I knew I wanted to use it for my next CD. I wanted to do something different with it so I ended up doing my very own mash up of it with Ralphie Rosario's "You Used To Hold Me" which is a bona fide classic. This mash up ended up being HUGE for me during DJ sets and so I included it on the CD,” Oscar G. says.

When he’s not touring the world, Oscar G. serves as the monthly resident at Miami’s premiere club Space. As one half of Murk, Oscar is busy running two labels – Murk Records and Murk Classics – and continues to deliver as a producer and remixer. This year Oscar G. and Ralph Falcon re-released their 1992 Funky Green Dogs hit “Reach For Me” (featuring remixes from Steve Lawler and Richie Santana / Peter Bailey) and delivered a jaw dropping remix of Lee Coombs “Shiver.” BBC Radio One’s Pete Tong has already labeled the track one of 2005’s finest. As for the future, we can expect more of the same from Oscar G. More DJ sets, more singles and more remixes. All made in Miami.

Oscar G. - Made in Miami Tracklisting
Disc 1
Disc 2
For the latest information on Oscar G. and Murk, check out DjOscarg.com, MurkRecords.com or Star69Records.com!
zine.v1.stories