By phocas September 01, 2005
Sarah Bates ~ photos by todd & Shaun Williams ~ Kansas City, MO - July 30, 2005 - It's that time of year again, time for scantily clad women, cold drinks, late nights and parties that go all night long. Everyone seemed to be just waiting anxiously in anticipation. You couldn't venture out in Kansas City without seeing a flyer or billboard, hearing a radio ad. And with the drought of parties this summer, everyone was rearing and ready to go. It was time for Chaos.

This particular party, Chaos Theory v3.0: The Catalyst, held three consecutive years in a row, at The Uptown Theater. I have had the pleasure of attending all three of these events and I must say this year they outdid themselves yet again. 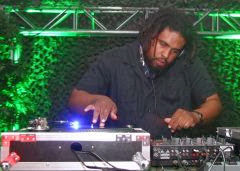 We showed up as the doors opened (as those of us who are hardcore do!) and there were already many anxious partygoers roaming around. We walked around and checked everything out. The Uptown itself seemed ready to party. All four rooms looked amazing, but I was really impressed with the decorations in the Jungle Room. This room was also where I heard my favorite set of the night from a local. Props to Arrhythmia he really tore it up. His crowd presence is awesome, and he really gets a crowd going. I even sat my stuff down and danced a bit.

The next set I caught was Sydeburnz in the main room. By that time the party was getting pretty full, and the crowd seemed to really dig his stuff too. I also caught a glimpse of the oxygen bar outside of the main room. I didn’t get a chance to partake, but it was cool to see one in action. I haven’t seen an oxygen bar in KC in years, and it was reasonably priced from what I heard, at ten bucks for the entire night.

The VIP room seemed like it was the place to be though. Manders earned some major respect that night by playing a 2 1/2 hour set, and rocking it the entire time. I was pretty impressed, as I’m sure many others were. I also heard good things about the complimentary Sushi (nice touch).

I’m not usually one to say anything negative, but there was one thing that effected everyone. Inadequate ventialtion made you feel like you were being slowly cooked to death in a giant oven. It didn't seem to deter anyone from having a great time though.

When Bad Boy Bill came on, you were lucky to find a couple square feet to dance in. I've seen him live a dozen times, but he really threw it down this night. With the massive crowd jumping up and down, the gorgeous lights and visuals, it was definitely an awesome sight to see. All of this surrounded by such a beautiful venue, this is something I will not soon forget.

As for the rest of the talent, I didn’t get to see everyone I wanted too. It proved to be a challenge to work my way through the crowd, stopping to say hi to what seemed like everyone I’ve ever met. Junkie XL, DieselBoy, Hive, and BT all got rave reviews (pun intended) from everyone I talked to. I also wanted to make sure to mention the awesome performance by video projectionist VJ Nexus. I can’t wait to see more from him in the future.

With four rooms, 30 Djs, world- renowned talent, and awesome sound and lights, Chaos Theory v3.0 was the party of the summer in KC. If you decided not to show, you missed out for sure.