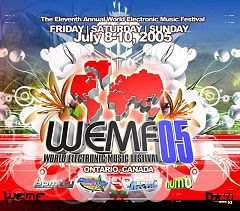 story by Nate Baker ~ photos by Shaun Williams ~ Ontario, Canada - This year the World Electronic Music Festival (WEMF) was held at Orangeville Fairgrounds in Orangeville, Ontario, Canada on July 8th, 9th, and 10th. My WEMF experience started late Wednesday evening as I and several other traveling companions decided that driving would be our best option, so we packed up our bags loaded up the truck and were on our way.

We arrived in Canada roughly 18 hours later and as the party didn’t start till the next day, we checked into a hotel and caught up on some much needed rest. We woke up early (ha! 10 a.m.) Friday morning and found a local Wal-Mart, picked up some last minute supplies and were off to the fairgrounds.

We arrived at the fairgrounds early that afternoon, which gave us plenty of time to get set up and situated. No sooner had I parked my truck and started unloading, when I was greeted by smiling faces and helping hands. We introduced ourselves and shook hands, and was given a bit of advice. “The best thing to do at these kinds of events is to get to know your neighbors, eh?” That was some advice that was well given.

After getting set and unpacked I proceeded to check out the venue. It was only 2:30 p.m. and the place was already starting to fill up. Several vendors were already in place. Some even had their own DJ’s and stereo equipment. I was very impressed with the way things were set-up.Restrooms were not a problem in the least bit. They had more than enough port-potty’s set-up all through out the venue. 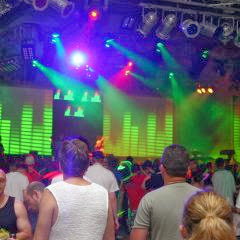 There were a total of four stages; the main room, the jungle/ d&b room, the hardcore room and the new talent room. All of them were set up in one main building. The two “main” stages ( The jungle room and the main stage) were set up in the two largest rooms opposite of each other with the VIP lounge up above and to the side also allowing you to walk back and forth between the main rooms. The hardcore room was in the back of the building of the main stage and wasn’t quite as big. The new talent stage was set up outside on the grass between the two main rooms. Their screen and light set-up was fantastic but the lack of lasers was a little disappointing.

Finally, 5:00p.m. rolled around and the decks started to spin, first with the new talent stage. However, no sooner than had things started than a storm intrueded on our party. It was pouring down rain and even a little hail. It didn't last long though and the festivities continued on through the night. Friday night quickly became Saturday morning and as the sun began to rise I headed to my dwelling to catch some shut-eye.

After some sleep, I awoke to people still partying. Personally, I just took the day to just relax and enjoyed some good conversation with our new found Canadian friends.

Saturday evening proved to be the party I was expecting it to be. Starting off with the raw style and sounds of DJ Donald Glaude. This man knows and loves his music and you can see it reflected in his actions and expressions. After playing what seemed like for hours on end with non-stop energy, it was finally time for the show I had been waiting to see, it was time for Rabbit in the Moon. 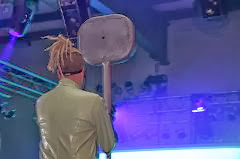 Words can not even begin to describe the kind of show this group put on. The general reaction was “WTF?”, This group not only has great music but the live performance performed by “Bunny” the main performer of the group is aw inspiring and jaw dropping, you can’t help but be entranced by what’s going on, on the stage. If you ever have a chance to see R.I.T.M to perform live I highly recommend it. You will not regret it.

I have never experienced anything like this event to even have anything to compare it too, but the venue, the performers, and the vibe from the people made this event a success to me and my companions. If you were not able to make it to this event this year no worries, this is a yearly event. So start saving your money now and get your camping gear in order, and I’ll see you all there again next year!