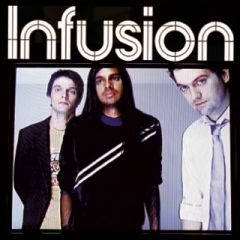 story by Betty Kang ~ Infusion returns to the U.S. after a rousing main stage amphitheater performance at Ultra Festival during Winter Music Conference and a host of international festival tour dates this summer. Infusion is now poised to preview songs from the album on this U.S. summer tour with the long-anticipated U.S. release of Six Feet Above Yesterday in late summer 2005 on Thrive Records (SONY Red).

Their new artist album, already voted “Best 50 Albums of 2005” in Rolling Stone - Australia, has just been released in the UK on the revered, resurrected dance music label Deconstruction. The album was initially scouted by Mike Pickering of M People (now head of A&R at SONY BMG) to re-launch the defunct label once home to M People, Kylie Minogue, Sasha and Robert Miles.

In other news, Infusion have recently remixed one of their heroes The Cure. As longtime fans, the band is ecstatic that the remix has been approved by Robert Smith. The track “The Walk” was originally on The Cure album 'Japanese Whispers' and released as a single in 1983. The Infusion remix will be part of the 'Future Retro' compilation out on July 19th on Rhino Records/Warner Music (USA) featuring remixes of New Order, Echo & The Bunnymen, Morrissey and Devo by today’s hottest electronic artists like Infusion, Scissor Sisters, Crystal Method, Richard X, and Swayzak etc. Infusion's remix skills are obviously highly prized - they've also been busy working on a remix for UK act El Presidente, who are currently on tour with Oasis.

The band’s own vinyl imprint came under scrutiny from the unhappy camera people and have subsequently changed their name to Music For Vinyl. Infusion’s album/singles on vinyl will be made available here. The next release will be “Natural” with exciting remixes TBC.

For more information about Infusion, just visit their web site at Infustion.net.AU
zine.v1.stories